SINGAPORE - Major property stocks fell sharply on early trade on Thursday (Oct 18) on the government's latest move to cut the maximum number of units allowed in new private flat and condo developments outside the central area from early next year.

The authorities are cutting the number of units allowed in a project and increasing the average size of new private flats outside the central area to at least 85 square metres, up from 70 sq m beginning Jan 17, 2019.

The URA said that this move was made to manage potential strains on local infrastructure and ensure the liveability of residential estates.

Along with the higher average flat size, the URA said that from next Jan 17, the URA will lower the 10 per cent bonus gross floor area (GFA) cap for outdoor spaces in private non-landed housing - namely balconies, private enclosed spaces and private roof terraces - to 7 per cent. The total balcony area for each unit will be capped at 15 per cent of the net internal area. 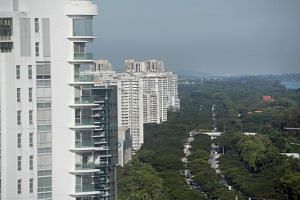 DBS's analysts Derek Tan and Rachel Tan said in a research note that developer stocks are likely to remain under pressure, and could even "test new trough levels". This could mean a near-term downside of up to 10 per cent for developer stocks.

"Homebuyers are likely to hold back purchases to 2019 if they can, as most are likely to adopt a wait-and-see attitude in order to ascertain the impact on developers' bids for upcoming land sites post new measures," they said. "Annual transaction volumes are likely to fall back to 7,500-8,500 units, which we estimate to be supported by home formation."

They estimate there could also be a 20 to 40 per cent drop in land prices with the revised unit size rules, assuming that developers aim to keep price levels at $1.5 million per unit with a 10 per cent profit margin.

RHB said that "the move will have a slight negative impact on developers' margins as developers typically tend to squeeze higher margins by building more smaller-sized units and maximising bonus GFA available under the Balcony Incentive Scheme".

The broker believes that most of the developers' existing landbank should not be impacted, but they will likely factor in the revised changes into their bidding price going forward.

OCBC Investment Research's Andy Wong wrote: "We believe these measures will likely result in developers’ submitting less aggressive bids for future land tenders. While valuations for the sector are cheap, in our view, we do expect some knee-jerk selling pressure on Singapore developers’ share price today, and currently have a neutral rating on the Singapore residential sector.