LONDON (REUTERS) - Sterling retreated on Thursday (March 14) as investors prepared for Prime Minister Theresa May to try again to win approval for her Brexit deal, after lawmakers voted overwhelmingly to seek a delay to the United Kingdom's exit from the European Union.

May will now renew efforts to get her twice-rejected divorce deal approved next week by Britain's parliament. She is piling pressure on rebel lawmakers to back her by threatening a longer delay if they vote against her.

After a highly volatile week for the pound during which it hit a nine-month high when lawmakers rejected leaving the EU without a deal, trading was relatively calm on Thursday.

May's push for another vote on the deal sets the stage for another showdown between her and rebel eurosceptics and means more uncertainty for investors.

"Next week becomes crucial as the prospect of a long extension can get more lawmakers to support May's deal. If her deal passes with a short extension, then cable could rise to $1.36-37 with an optimistic bias," said Fritz Louw, a currency strategist at Japanese bank MUFG.

All 27 EU members must approve any extension. 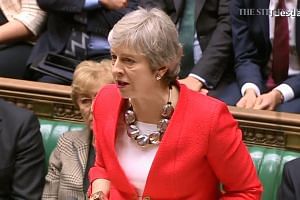 The pound on Wednesday enjoyed its biggest one-day gain against the dollar since last April after UK lawmakers resoundingly voted to reject a no-deal Brexit.

Investors hope eurosceptic parliamentarians will finally back the unpopular deal Prime Minister Theresa May negotiated with the EU. If not, they may have to accept that Brexit could be watered down or even thwarted by a lengthy delay.

Some of that optimism has already faded, however, with no sign that lawmakers can reach any consensus on amending May's deal so it is acceptable to all sides and the EU.

Tim Graf, head of macro strategy at State Street Global Advisors, said the chances of a no-deal Brexit were now less than 5 per cent.

But he added: "There is always the chance the EU won't grant an extension if they are just going to be trying to push this deal through... that's where the caution comes in."

A series of votes, including on introducing a second Brexit referendum, were rejected by parliament earlier on Thursday and the pound was little moved.

It reached a peak of 84.72 pence to the euro, approaching recent 22-month highs.

Those gains have been hard to cling onto as traders contemplate the array of possibilities that have opened up.

Options markets show implied sterling volatility - a gauge of expected swings in a currency - still elevated, with two-week vols jumping off one-week lows touched on Wednesday. Sterling vol is higher than G10 as well as many emerging currency peers.

"The best strategy for trading the pound now is to simply leave the currency alone, and to make sure one is hedged against all catalysts for big swings in either direction," he told clients.