LONDON (REUTERS) - The pound dropped more than 1 per cent on Wednesday (Sept 25) versus the dollar, ceding gains made the previous day after the Supreme Court's ruling against Prime Minister Boris Johnson, as investors priced in many more months of Brexit and general election risk.

The fall put sterling on course for its biggest daily decline in two months.

Johnson was dealt a blow by the UK top court, which ruled on Tuesday he had unlawfully suspended parliament, sending the pound half a percent higher.

While the ruling reinforced belief that Britain was unlikely to leave the European Union without a deal by Oct 31, other risks remain, including a split parliament and an early general election.

"Yesterday, there was some misplaced optimism that Johnson would be removed and no-deal would be further away. But what we see today is that the status quo in terms of Brexit has not altered at all," Rabobank strategist Jane Foley said.

"But we still have Johnson in place, the opposition still doesn't want a general election and we are still cornered with respect to Brexit, it's taken a day for that to sink in."

Sterling's weakness was in part also down to a firmer dollar, which has been lifted by bellicose trade war rhetoric from US President Donald Trump. Against the greenback, the pound fell 1.1 per cent to US$1.2356, a two-week low. It also weakened to a six-day low of 88.17 pence against the euro .

Johnson now faces a hostile parliament that has returned to sitting, and his opponents are seeking new ways to block him from pursuing a no-deal Brexit that they fear would cause huge economic disruption. 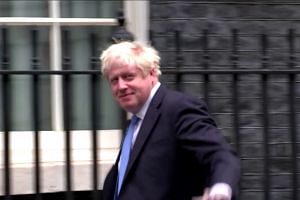 He has repeated he can strike an exit deal at an Oct 17-18 EU summit, but EU negotiators say he has made no new proposals that can break the deadlock over how to manage the Irish border after Brexit.

Parliament has already passed a law requiring him to request a Brexit deadline extension to Jan 31, should a deal not be reached.

"The market is pricing in an increased risk of a no-deal Brexit," said Thu Lan Nguyen, an analyst at Commerzbank.

"Nothing really has changed with respect to Brexit... the (Supreme Court) ruling hasn't really changed anything," she said.

Implied sterling/dollar volatility, a gauge of expected currency swings and used by many investors in place of trading in the spot market, reflected the risk of continued political turmoil.

The one-month volatility gauge, capturing the EU summit risk, slipped to 10.9 vols, down from the 12.3 vols level hit before Tuesday's ruling, but the decline appears to have stalled.

Also on derivatives markets, risk reversals show a higher implied volatility premium for sterling puts over calls - indicating more bias to sell sterling than to buy - on the two- and three-month contracts that are most likely to capture election risk.

Meanwhile, opposition leader Jeremy Corbyn said that once a no-deal Brexit had been averted, it would be appropriate to move a no-confidence motion and then hold a national election.

"The main risk now is that we are in a never-ending limbo,"said Kit Juckes, an FX strategist at Societe Generale in London.