LONDON (BLOOMBERG) - The pound fell after British politicians failed to deliver the decisive Brexit vote that had been promised at the weekend.

The decline brought to a halt a four-day winning streak that was fuelled by speculation Prime Minister Boris Johnson could win parliamentary backing for his divorce deal. But strategists say the drop may prove short-lived.

"Investors will have to balance the disappointment of a further delay with the increasing likelihood of eventual passage," said Mr Ned Rumpeltin, European head of currency strategy at Toronto-Dominion Bank. "The tail risk of an accidental no-deal crash out has also ratcheted down."

Analysts remain bullish even as a verdict on Mr Johnson's new divorce deal was deferred. Instead, lawmakers supported an amendment put forward by former Conservative minister Oliver Letwin which requires the House of Commons to pass all necessary Brexit legislation before holding a formal vote on the Withdrawal Agreement. That meant the prime minister was legally bound to ask the European Union for another extension to negotiations.

"Sterling is likely to remain somewhat volatile, but supported, because it appears the chances of a hard (no-deal) Brexit are very slim," said Mr Joseph Capurso, a senior currency strategist at Commonwealth Bank of Australia.

The prime minister is set to introduce the legislation needed for an Oct 31 exit and it is possible he will garner enough support to push his deal through, according to a Bloomberg analysis. The Times of London reported that the EU may grant a three-month delay if Mr Johnson is unable to secure support for his deal this week.

"Seems like an anti-climactic open for sterling, with investors potentially comforted by the Article 50 extension that the EU seems willing to grant in the case no-deal is agreed," said Mr Valentin Marinov, Credit Agricole's head of Group-of-10 currency research. "Given that another vote on the Johnson deal could come as soon as Tuesday, investors could use any sterling dips as buying opportunity."

Mr Marinov is sticking to his view that the pound could reach US$1.36 medium term. 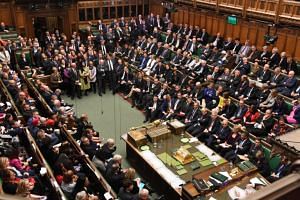 Request for Brexit delay: What could happen next?

EU will delay Brexit until February if Boris Johnson fails to ratify deal this week: The Sunday Times

Boris Johnson sends Brexit delay letter to EU: A look at the text

European Council President Donald Tusk said he would consult EU leaders on how to react to the United Kingdom's request for another extension.

"General sentiment is still positive on Brexit, and this extension could be a small bump in the road," said Mr Sandeep Parekh, an FX strategist at Australia & New Zealand Banking Group. "But I think the next few days will be very important."

Still, sterling could move sharply lower if Brussels were to formally reject a later deadline, according to Mr Rumpeltin. It may lurch lower towards US$1.2835 and then further to US$1.2750 "if the sense from the EU was one of growing rancor and impatience", he said.

But his central view is one where the EU would grant an extension.

That more bullish slant for the pound is reflected in the views of other strategists too.

"The weekend's events, if anything, further reduce the risk of disorderly exit," said Mr Adam Cole, Royal Bank of Canada's chief currency strategist. A knee-jerk negative sterling reaction may be a buying opportunity, he said.