When the going was good, Sete Brasil was a poster child of Brazil's booming oil and gas industry, promising to create hundreds of thousands of jobs while building the world's largest deepwater drilling fleet.

But today, it is becoming more well known, especially in this part of the world, as a source of trouble for international companies, including Singapore's Keppel Corp and Sembcorp Marine.

Just five years on from its creation, the company, set up to build offshore rigs for national oil major Petrobras, is in the midst of a sprawling corruption scandal unfolding against a backdrop of sharply slumping oil prices. Its global network of suppliers, including Keppel and SembMarine, have inevitably been caught up in this toxic situation. 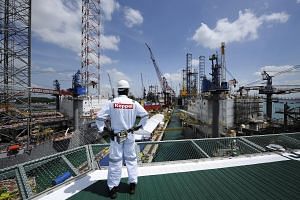 Sete Brasil was formed in 2010 by the Brazilian government, pension funds and several banks. It was to issue contracts for the construction of up to 29 deepwater oil rigs, which it would then lease to Petrobras.

The move was part of the government's push to get oil firms to use locally made parts and equipment, and came after Petrobras made the Western Hemisphere's biggest crude oil discovery since 1976 in the Atlantic Ocean.

Then scandal hit Petrobras. A whistle-blower - former executive Pedro Barusco - said in December 2014 that he had made some US$100 million (about S$140 million) in ill-gotten gains from his time working at the state-owned oil giant.

Investigators soon uncovered a massive corruption scandal, old-fashioned in its methods but staggering in scale - with top Petrobras officials alleged to have received Rolex watches, US$3,000 bottles of wine, yachts, helicopters and prostitutes as kickbacks.

Federal investigators say that since 2004, construction firms have paid about US$800 million in bribes and kickbacks by overvaluing contracts with Petrobras, the ruling Workers' Party and its affiliates.

The probe has ground Petrobras' operations almost to a halt, causing it to suspend contracts, cut off credit supplies and force layoffs at shipyards and other firms.

Given that Petrobras is its only client, Sete Brasil's main source of funds is drying up rapidly.

To make things worse, the firm failed to secure a life-saving loan from the National Development Bank, after prosecutors released testimony by a former director who said the company accepted bribes in exchange for contracts.

The terrible timing of the scandal has only added to its woes. Tumbling oil prices over the past 18 months have led oil producers all over the world to cut back on investment plans and axe jobs.

Creditors have repeatedly rolled over Sete Brasil's loans since October 2014 in a bid to help it survive.

Nonetheless, Sete Brasil has not paid the shipyards it hired to build rigs, including Keppel and SembMarine, since November 2014. Keppel has orders for six semi-submersible rigs worth $6.2 billion while SembMarine has orders for seven drillships worth $7 billion. The orders were secured in 2011 and 2012, when the energy sector was booming.

Both companies could be forced to reverse billions of dollars in revenue and profits, and make costly impairments if Sete Brasil files for bankruptcy protection.

Meanwhile, Sete Brasil has been working to get a restructuring plan in place, but the threat of bankruptcy still hangs over its head.