SINGAPORE (REUTERS) - Oil prices slipped on Wednesday (Sept 18), extending losses from the previous session after Saudi Arabia’s energy minister said the kingdom will restore lost oil production by the end of the month.

But investors remained cautious about Middle East tension after the United States said it believes the attacks that crippled Saudi Arabian oil facilities last weekend originated in southwestern Iran. Iran has denied involvement in the strikes.

Brent crude oil futures fell 15 cents, or 0.2 per cent, to US$64.40 a barrel by 0253 GMT, after tumbling 6.5 per cent the previous session. The contract soared as much as 19.5 per cent on Monday to US$71.95 per barrel, the biggest jump in history after a series of drone attacks on Saudi’s key oil facilities disrupted production.

“The risk of further escalation of conflict in the Middle East remains over the energy market and wild swings will likely resume when we see tit-for-tat responses from a Saudi-US led coordinated effort,” said Edward Moya, senior market analyst at OANDA in New York.

“The situation with the oil market will remain tense, but the initial fears of a sustained disruption with world oil supplies have been alleviated in the very short-term.”

Saudi Arabia sought to reassure markets after the attack on Saturday halved its oil output, saying on Tuesday that full production would be restored by month’s end.

Energy Minister Prince Abdulaziz bin Salman said on Tuesday that average oil production in September and October would be 9.89 million barrels per day and that the world’s top oil exporter would ensure full oil supply commitments to its customers this month.

Saudi Aramco has informed some Asian refiners that it will supply full allocated volumes of crude oil in October, albeit with some changes. 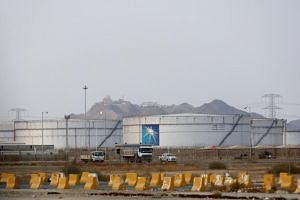 How Asian governments are reacting to the Saudi oil attack

Relations between the United States and Iran have deteriorated since US President Donald Trump pulled out of the Iran nuclear accord last year and reimposed sanctions on its oil exports.

Tehran rejects the charges it was behind the strikes and on Tuesday ruled out talks with Trump.

In a note late on Tuesday, BNP Paribas’ Harry Tchilinguirian said “In view of the vulnerability of Saudi’s supply chain and the likelihood that such attacks could be repeated in the future, we expect the market to reprice the geopolitical risk premium in oil.”

But Moya said oil prices “will continue to struggle to maintain any sustained rally as global growth weakness continue to drive demand concerns”.

US crude inventories rose by 592,000 barrels in the week ended Sept. 13 to 422.5 million, data from industry group the American Petroleum Institute showed on Tuesday. Analysts had expected a decrease of 2.5 million barrels.

Official US government data will be released on Wednesday.