SINGAPORE - OVersea-Chinese Banking Corporation (OCBC Bank) announced its four-quarter results on Wednesday (Feb 14), beating forecasts with a 31 per cent jump in net profit to S$1.03 billion, from S$789 million a year ago.

Analysts polled by Bloomberg had tipped an average forecast of S$956 million.

OCBC said it saw sustained growth momentum across the group's three business pillars, namely its banking, wealth management and insurance segments. Robust year-on-year performance was due to "higher operating profit from its insurance business, and strong performance in its investment portfolio as a result of favourable market conditions", OCBC added.

This comes as Great Eastern - the insurance arm of OCBC - on Tuesday reported a more than doubling in net profit in the fourth quarter to S$423.6 million.

Meanwhile, OCBC's net interest income grew 14 per cent to S$1.42 billion, contributed by an 11 per cent rise in average interest earning assets, and a four basis points increase in net interest margin (NIM) to 1.67 per cent. 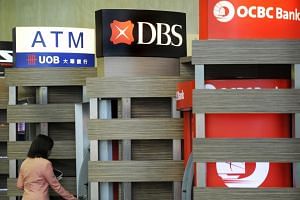 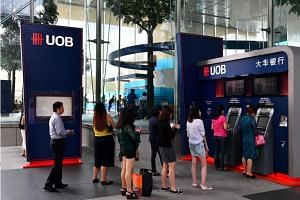 In November last year, the group completed the acquisition of National Australia Bank's private wealth business in Singapore and Hong Kong, which added S$2.06 billion in loans, and S$2.42 billion in deposits to the OCBC franchise. Operating expenses grew 9 per cent to S$1.07 billion in line with increased business volumes.

In addition, the group's funding, liquidity and capital position continued to be resilient, OCBC said. Customer loans of S$237 billion were up 8 per cent from S$220 billion last year, driven by growth across the corporate and consumer segments.

Geographically, Singapore accounted for 55 per cent of pre-tax profit in FY17, while China accounted for 19 per cent; and Malaysia at 14 per cent.

He said the bank took more provisions for bad loans in the O&M segment in the fourth quarter compared to the third quarter, noting that there remains uncertainty as charter rates have yet to pick up despite higher oil prices.

Overall allowances in the fourth quarter rose 15 per cent to S$178 million from a quarter ago, though this is down from S$305 million a year ago.

"It is our intention to continue to work with our borrowers to ride though this depressed state," said Mr Tsien, referring to charter rates, and saying that the O&M segment remains important to Singapore. The bank is assuming the collateral value of vessels at 30 per cent of the market rate for now.

He added that the bank is selectively supporting O&M players that are modifying their vessels for new forms of utilisation, by extending working capital.

There has been some signs of capital injection coming through from non-banking players, such as funds and financial players. Mr Tsien said while such forms of capital are welcome, the bank remains cautious in engaging them because the O&M industry requires expertise, and it is not always clear that such investors are investing with the view of utilising the assets for "productive" means.