SINGAPORE - The Monetary Authority of Singapore (MAS) will fund up to half the cost of promising fintech "proof-of-concept" trials based in Singapore, up to a maximum of $200,000 for each project under a new grant scheme.

Deputy Prime Minister Tharman Shanmugaratnam said on Thursday (Nov 17) at Universal Studios for the Fintech Awards that the scheme is aimed at ideas that can benefit not just an individual financial institution or start-up, but the financial system at large, in Singapore or abroad.

Even as he announced the new grant, Mr Tharman noted that "not all of us can be entrepreneurs".

He added: "But we all have to build the skills and expertise necessary to power the digital economy."

He said the financial sector in particular has to build new capabilities.

"The likelihood is that many jobs will remain but most jobs will be transformed, requiring new skills and capabilities to make the most of new technologies," he said. 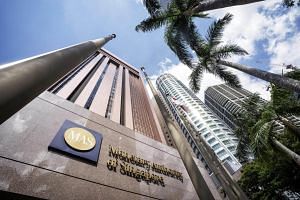 Singapore to launch blockchain project for interbank payments, among other fintech initiatives: MAS

"In the financial sector, there is already growing need for skills in data analytics, in digital and mobile user interfaces, and in application development, in addition to core finance skills."

Mr Tharman said the University of Pennsylvania's Wharton School will be launching a new executive education programme in Singapore focused on financial innovation.

The Wharton FinTech Innovation Programme for Financial Institutions is expected to launch in the second quarter of next year and aims to expose senior managers in incumbent financial institutions to current topics in fintech.

Mr Tharman also mentioned a recently formed committee that will identify infocomm technology skills in demand and work with training providers to meet these demands.

The MAS and the Association of Banks in Singapore awarded 10 fintech companies a total of $1.15 million at the awards, which took place during the week-long Singapore Fintech Festival.

Correction note: In an earlier version of the story, we said that Mr Tharman announced a new committee to identify infocomm technology skills in demand and work with training providers to meet these demands. This is incorrect. The committee had already been formed.