President Tetsuro Aikawa bowed in apology on Wednesday (April 20) before briefing reporters on the extent of the cheating. About 625,000 minicars produced over the past three years, three-quarters of which it supplied to Nissan Motor, were marketed as being as much as 10 per cent more fuel efficient than they were by understating how much air and tire resistance they encounter out on the road.

A bigger issue may lie in store: Mitsubishi Motors has been testing passenger cars using a method not compliant with Japanese standards since 2002, according to Aikawa. While the company said it's unclear whether the flawed method enhanced or reduced fuel economy, further revelations that ratings have been exaggerated may overwhelm the carmaker, which has the lowest level of cash among its Japanese peers. The company required two rounds of bailouts more than a decade ago from Mitsubishi group companies to survive a scandal involving a cover-up of deadly defects.

"Since the cover-up of recalls in the 2000s, we have tried to reinforce compliance within the company, but a compliance sense still hasn't penetrated to every employee," Mr Aikawa said Wednesday. "I deeply understand how difficult it is to strengthen compliance, and I think this is a very shameful issue."

Mitsubishi Motors' shares fell 15 per cent for the biggest decline in more than a decade in Tokyo trading on Wednesday, cutting its market value to 721 billion yen (S$8.83 billion). 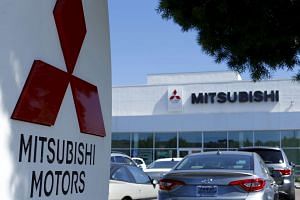 The deliberate use of biased data led to fuel efficiency being overstated for the Mitsubishi eK Wagon and eK Space, which are also sold by Nissan as the Dayz and Dayz Roox. The mishandling of the test data was intentional, Aikawa said.

The violation could result in Mitsubishi Motors having to pay back government tax rebates its minicars shouldn't have been eligible for, said Ryugo Nakao, an executive vice president. The company is checking whether its improper conduct affects overseas models and said it's unable to estimate the impact on its business at this point.

Mitsubishi Motors has been seeking to restore confidence in its vehicles after a series of scandals more than 10 years ago led the carmaker to seek multiple bailouts from Mitsubishi group companies. Mitsubishi Motors had covered up defects involving flawed axles that could lead wheels to detach.

"It's not the first time for Mitsubishi to have this kind of issues and this definitely won't help them rebuild their reputation," said Seiji Sugiura, an analyst at Tokai Tokyo Research Center. "Investors are shocked. Those who didn't take action today may rush to sell tomorrow."

Mitsubishi Motors reported having 484.7 billion yen in cash and equivalents as of the end of December, the least among Japan's major automakers and about one-tenth the cash pile on Toyota Motor's balance sheet.

The company's meager financial resources leave it stretched thin for research and development. Mitsubishi Motors forecast spending 82 billion yen for the fiscal year ended in March. By contrast, Toyota would have had to spend about 88 billion yen on average per month to meet its annual projection.

It's unclear whether Mitsubishi Motors's data manipulation will compromise its minicar alliance with Nissan, which discovered the discrepancy. Nissan voluntarily suspended sales of the Dayz and Dayz Roox models Wednesday until Mitsubishi Motors provided further clarification, said Jonathan Adashek, a Nissan spokesman.  The episode deals another blow to an industry already dealing with reputation damage. Volkswagen admitted last year to rigging diesel models with software to meet US emissions standards. Hyundai Motor and Kia Motors agreed to pay fines and forfeit emissions credits in late 2014 to settle US claims they overstated mileage ratings. Ford Motor also lowered ratings for hybrid models in 2014 and 2013.

Takata is now seeking sponsors that would replenish its capital and allow it to emerge as a new company, a person familiar with the matter said this month.