Singapore pre-school operator MindChamps is making a foray into China, where it is in talks to take over a handful of pre-schools in the Chinese capital.

"We've been quite selective and focusing on Beijing first, there are some targets we are looking at," said MindChamps executive chairman David Chiem, adding that the firm was in talks with "three or four" pre-schools and would be making a firm announcement soon.

Mr Chiem, who was speaking to The Straits Times at an education symposium - MindChamps' launch event - in Beijing yesterday, said his aim is to capture 5 per cent of the premium pre-school market in China. He estimated that there are about 30,000 such schools in China.

"Launching into China is a very important move… strategically for us, China is part of our global expansion," he said.

Currently, MindChamps has close to 100 pre-schools in Singapore, Australia, the United Arab Emirates, the Philippines, Vietnam and Myanmar. Forty of them are in Singapore. The Straits Times' parent company, Singapore Press Holdings, is a MindChamps shareholder.

Mr Chiem said he believed MindChamps is in a strong position, and it hopes to lift standards of pre-schools in China.

"The physical schools are already here, what we are bringing is the software - this is our research, the curriculum, the teacher training and management system," he said.

The pre-school sector is one of the fastest growing in the education industry in China, but it is also one coming under increasing scrutiny.

MindChamps' launch into China comes as Beijing is seeking to bring the fast-growing but poorly regulated sector to heel.

There were about 255,000 kindergartens in the country last year, with about 46 million children, the state-run China Daily reported in September. In 2012, the number of kindergartens was only 181,000. 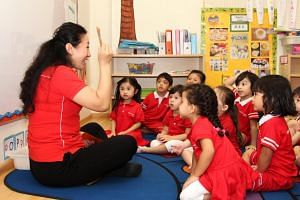 Instances of child abuse and poorly trained teachers in kindergartens have made headlines in Chinese state media.

In September, the legislature announced that it will be drafting a law to regulate the fast-growing sector.

Last Thursday, China's Cabinet, the State Council, also published a directive stating that it is banning private kindergartens from seeking public listings - a move against operators who buy schools and then list their companies for a profit.

Chinese education expert Xu Hui, vice-president of the Chinese Society of Educational Development Strategy, noted that the pre-school sector in China had grown dramatically in the last five years and is facing many problems, including a lack of professionally trained teachers and great differences in the quality of teaching among kindergartens.

Some private kindergartens were also charging high fees, he said, adding that profit-making should not be their main focus.

"Education institutions are for public benefit, these include pre-school education centres. This is a principle that must be adhered to," said Mr Xu.

Asked about China's efforts to regulate the sector, Mr Chiem said MindChamps is supportive of the Chinese government's latest efforts, pointing out that the pre-school sector was being commodified, with operators buying and flipping schools for a profit.

"From our perspective, it's great, these guys that rely on doing this can't sell their schools for ridiculous prices any more," Mr Chiem said, adding that MindChamps is in China for the long term, and not to buy and trade schools for a profit.