Companies that set the pace these days tend to be in the technology sector, but one of Singapore's fastest-growing firms is in the far from glamorous field of recycling precious metals.

BR Metals started operations here in 2014, and from that point to 2017, recorded a compound annual growth rate of over 250 per cent.

Its remarkable expansion helped it secure the top spot in a study undertaken last year by global research company Statista and The Straits Times to find the country's fastest-growing businesses.

The study came up with a league table of 85 local companies that achieved high revenue growth between 2014 and 2017. Most are privately run small and medium-sized enterprises (SMEs).

BR Metals managing director Frank Chen said: "The challenges we encountered along the way were not dissimilar to those faced by other SMEs.

"These included intensifying competition, supply issues, price wars and the labour crunch in Singapore. We tackled these challenges head-on with strategic planning, automation and market segmentation, along with the same gritty determination and never-say-die attitude like the other companies that have made the list."

Straits Times editor Warren Fernandez, who is also editor-in-chief of Singapore Press Holdings' English/Malay/Tamil Media Group, noted: "In a fast-changing economy, companies which are growing rapidly have a special cache as everyone wants a piece of the action.

"We wanted to identify these players and showcase how they were moving ahead. We are happy to work with our partners, Statista, on this project, given their good track record on data analytics projects of this sort with other leading media brands internationally."

Dr Thomas Clark, associate partner and responsible for corporate development and international affairs at German-based Statista, said the main point of the study was to find out which firms were the accelerators of the economy. He said: "This list is interesting because it highlights companies you won't find on the regular pages in the business section of a newspaper.

"They are usually too young and too small to be featured there. Yet, they are often very interesting. So, the list helps to find out how vibrant some of these 'growth champions' are and what business models they have."

Overall, the average compound annual growth of Singapore's fastest-growing companies between 2014 and 2017 was 49 per cent.

While BR Metals rules the roost, technology companies are at the forefront of the rankings, which Dr Clark said is not surprising for Sin-gapore given its emphasis on digital innovation. "Comparing it to other countries, though, having technology at the front may not be that obvious. In Italy, for instance, many of the growth champions deal with food or luxury products.

"In that sense, the cliches you have of a given economy are reflected in these lists and turn out to be true to a certain extent."

He noted that high-tech security firms and medical service providers, such as dental companies, were also high on the list.

Nuffield Dental came in second with a compound annual growth rate of around 180 per cent, and V-Key, which creates digital security technology for mobile applications, was next with a rate of about 150 per cent.

V-Key co-founder and chief executive Joseph Gan said the company's technology has to be robust and ready for mass deployment. "Our main challenges were ensuring our solutions were able to support and meet the expectations of our customers and ensuring the right commercial models that our customers expect were in place." 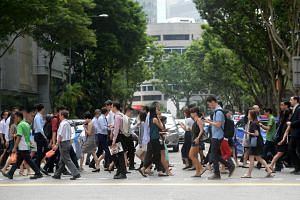 Zion Global Marketing: Staying on their toes to thrive in the digital space

Healthcare provider OneCare, which ranked seventh, started with a clinic in Boon Lay that had three doctors and three clinic staff in 2013, but now employs 100 staff and around 20 doctors in 16 clinics. It registered a compound annual growth rate of around 113 per cent.

Dr Eve Anwar, director of public relations at OneCare Medical, advised other firms to devote the time and energy to discovering the operation's sense of identity, and operating principles and ethics.

"Distil your company to a simple set of target outcomes, and look back to those targets at every crossroads in your business journey," she added.

Giantech Engineering, 57th on the list, started out with one man operating out of a Housing Board flat in 2001 under a different name. It is now a recognised service agent for many types of specialised marine equipment, and assists ship owners and fleet managers with their tanker needs.

Other firms grew alongside their adoption of new technologies. Mr Tay Kim Yong and Mr Tan Sze Yong, the directors of fresh produce distributor A Yong, said they use automatic operations to process fruits and vegetables more efficiently, while retaining traditional methods to handle processes that no machine available can tackle. The company ranked 10th.

A-Plus Automation (S), which ranked 18th, branched out into the online market in the last few years as well. The firm specialises in designing, manufacturing and installing automated systems for handling and sorting products.

Managing director Rodney Ham said: "Since entering into the e-commerce industry, it gives us great opportunity to expand our business throughout the South-east Asia region."

A version of this article appeared in the print edition of The Straits Times on February 27, 2019, with the headline 'Metals recycling firm claws its way to the top with grit'. Subscribe
Topics:
More
Whatsapp Linkedin FB Messenger Telegram Reddit WeChat Pinterest Print Purchase Article Copy permalink