NEW YORK (BLOOMBERG) - Asian stocks were poised to track a rebound in US equities as President Donald Trump said he had an ongoing dialogue with China, assuaging some concern about the deteriorating trade war.  Futures pointed higher for stocks in Japan, Hong Kong and Australia.

US stocks rebounded from the worst rout in four months as Trump moved to reassure markets that he will clinch a trade deal with China. The dollar rose and Treasuries fell.

The S&P 500 jumped more than 1 per cent, reclaiming about half of Monday's (May 13) sell-off, with momentum picking up after Trump said he's talking with China. The benchmark is still down more than 4 per cent since the president escalated the trade war on May 5. Battered tech shares led gains as Apple Inc. and Nvidia Corp. bounced back from their biggest one-day declines since January. Heavyweight exporters Caterpillar Inc. and Boeing Co. reversed around half of Monday's losses.

The dollar advanced for a second day against major peers, including havens such as the Japanese yen and the Swiss franc. The offshore yuan - a key risk indicator due to concern China will use it to retaliate against US tariffs - stabilised after a six-day decline. Ten-year Treasury yields edged higher to 2.42 per cent. Commodities targeted by Chinese tariffs - including soybean and cotton futures - also rebounded. West Texas crude rose above US$61 (S$84.5) a barrel.

"Investors are looking for opportunities to get into this market, and so far in 2019 there really haven't been any 'buy the dip' opportunities other than last week," Ryan Nauman, market strategist at Informa Financial Intelligence, said by phone. "And you're also seeing President Trump confirmed a meeting with President Xi during next month's G-20 summit, which provides some optimism that despite the increase in tariffs, negotiations are still ongoing."

Signs emerged Tuesday Trump had pressed the trade battle far enough. The president sprinkled his criticisms of China over the last 48 hours with enough signals that negotiations have not completely broken down that traders rushed back into the beaten down market to find bargains.

But the rally remains tenuous as the White House announced it was prepping tariffs on the remaining US$300 billion of Chinese imports, and economists warned the new penalties will eventually weigh heavily on the American economy. 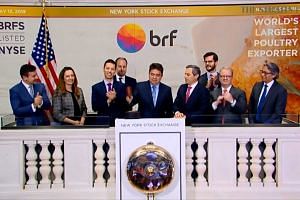 Here are some notable events coming up this week: Earnings this week include Alibaba, Tencent, Cisco, Nvidia.

Bank of Indonesia has an interest rate decision on Thursday.

Australian unemployment is out on Thursday.

The Nasdaq Composite Index advanced 1.5 per cent, while the Dow Jones Industrial Average added 1.2 per cent.

Currencies The Bloomberg Dollar Spot Index gained 0.2 per cent to the highest in more than a week.

Bonds The yield on 10-year Treasuries rose two basis points to 2.42 per cent.

Commodities West Texas Intermediate crude climbed 1.2 per cent to US$61.76 a barrel.