SINGAPORE - Traders here have had a frantic morning as investors - facing the prospect of a Trump presidency - rushed for the exit.

"Markets were up for a few days before because it was commonly predicted that Clinton will win. Now we are seeing Trump taking over several battleground states including Florida and Virginia.

"So there is a lot of knee-jerk sell-off right now of global equities, just like what happened in June when people were shocked to see Brexit actually happen."

With the results of the US presidential election rolling in, the Straits Times Index has tumbled by around 1.8 per cent to 2,769 before noon, and other regional markets are in equally bad shape. 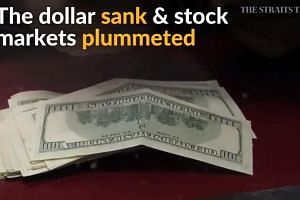 Tokyo's Nikkei has plunged 2.2 per cent, Hong Kong's Hang Seng was down 2.6 per cent and Shanghai Composite has slid 0.9 per cent. In Australia, the benchmark ASX200 has lost 3.2 per cent.

As of 11.30am and with voting results from 31 states already out, Mr Trump is currently leading his Democratic rival Hillary Clinton.

Ahead of Wednesday's voting, Ms Clinton was the clear favourite to win the race to the White House, especially among investors who fear Mr Trump's divisive policy stance and want status quo under Mrs Clinton.

On the trading floor, distraught faces are everywhere as traders relive the Brexit shock.

Remisier Alvin Yong said: "The Dow Jones futures are already down by over 600 points, and the worse may yet come after the US markets opens. Hopefully the local market is already at its bottom, but I'm surprised if it continues to head south."