SINGAPORE - A slump in VIP play at Marina Bay Sands has dragged fourth-quarter Ebitda (earnings before interest, tax, depreciation and amortisation) down 20.8 per cent to US$362 million from the same period a year ago.

Lower casino rolling chip volume - which typically refers to VIP play - tumbled 13.9 per cent from the same period a year earlier to US$6.8 billion in the three months ended Dec 31.

Total casino revenue slipped 17.6 per cent to US$500 million, as a 0.9 per cent or US$4.68 million increase in the mass win-per-day for non-rolling tables and slots failed to make up for the drop in VIP visitors.

Separately, retail tenant sales per square foot at The Shoppes at Marina Bay Sands jumped 19.4 per cent to US$1,898 from the preceding year. 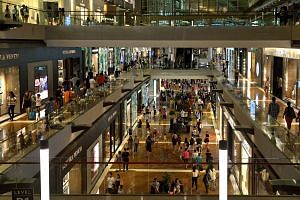 Net loss attributable to the group for the period was US$170 million, compared to net income of US$1.21 billion a year ago. This translates to a loss per share of US$0.22, versus earnings per share of US$1.53 in the prior-year quarter. The decrease was mainly attributable to non-recurring, non-cash income tax items due to the implementation of US tax reforms, the company said.

Commenting on the group's overall performance for the quarter, chairman and CEO Sheldon Adelson noted: "The decrease in operating income was due to depreciation acceleration and asset impairments associated with our development projects in Macau. We also had softer rolling chip volume in Singapore, partially offset by stronger operating performance in Macau due to a 10 per cent increase in revenues."

For the three months ended Dec 31, the company paid a recurring quarterly dividend of US$0.75 per common share, and increased its return of capital through share repurchases of US$430 million. The group also increased its annual dividend for the 2019 calendar year to US$3.08, or US$0.77 per share per quarter.