KUALA LUMPUR/SINGAPORE (REUTERS) - The abrupt exit of Malaysia Airlines' German boss has revived debate in Malaysia over the wisdom of picking a foreigner to run its ailing carrier, potentially limiting the group's options as it seeks a new leader midway through a radical revamp.

Christoph Mueller, a German national credited with turning around Aer Lingus, took the helm at state-owned Malaysia Airlines in May last year on a three-year contract, as it attempted to pull itself back after the loss of two Boeing 777s in less than a year.

Among the front-runners to replace him as CEO is chief operating officer and Irishman Peter Bellew, formerly with Ryanair, who sits on the group's board, industry sources and sources familiar with the matter said.

Another is Malaysian executive Mohammed Shazalli Ramly, head of unlisted telecommunications firm Celcom Axiata Bhd, who has no experience in airlines but joined the board last year. 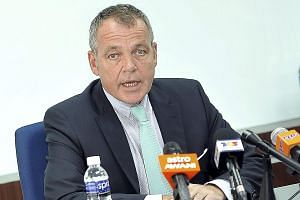 "It is a strategic national company with lots of national pride involved. When they hired (Mueller), they cannot just say they did not anticipate this from the beginning," said Tian Chua, national vice president of opposition party PKR.

He said his party had advised the government in 2014 that it was "unfair" to bring in a foreigner for the job. "The point is that the government did not properly consider all the possible factors that affect this decision."

Surprising even those close to him in the company, Mr Mueller announced his departure for unspecified family reasons late on Tuesday, giving no further detail. He will leave the top job in September, though he remains a non-executive director.

With little detail to go on, politicians, newspapers and social media have blamed the exit on everything from internal disagreements to political rows and friction with Khazanah , the Malaysian sovereign wealth fund which bankrolled the bail-out.

Mr Mueller dismissed rumours in a "town hall" meeting with employees, according to newspaper reports. The government has not commented, while Khazanah has said it would have wanted Mr Mueller to continue, but respected his decision. It has not commented further.

Malaysia Airlines said any comment on succession is all speculative at the moment.

But whatever the real reason, analysts say, fresh debate over the choice of a foreigner for the top job will prove a headache for the government and the airline, which had anticipated Mr Mueller would give way to a local successor in time.

Shazalli Ramly, if appointed, would not be the first executive without an industry background to successfully run an airline: Kazuo Inamori successfully turned around Japan Airlines (JAL) with no previous experience at all in aviation management.

But such appointments and successes are rare.

Any successor will also be expected to complete the course chartered by Mr Mueller - and it is all even tougher, analysts predict, in a country where running the flag carrier involves unions who have close ties to the ruling party.

"(Mueller) made the airline more professional and I don't know if that will continue with his departure," one company executive said.