TOKYO (BLOOMBERG) - For a leader who once suggested outlawing currency trading, newly (re-)installed Prime Minister Mahathir Mohamad got a decent welcome from financial markets on Monday (May 14).

In retrospect, closing the onshore markets for two days after Wednesday's election looks like a wise move. While assets that trade outside the South-east Asian nation had tipped significant declines, once the screens came back on in Kuala Lumpur, in the event, things settled down after some volatility.

After forwards contracts suggested the ringgit would tumble as much as 4 per cent, the currency was only down 1 per cent against the US dollar at its worst point Monday. The benchmark stock index dropped as much as 2.7 per cent before heading higher. Bonds also tumbled before paring losses.

While there may be turmoil yet to come, including concerns about a potential widening in Malaysia's fiscal deficit under the unprecedented coalition that's taken office, for now, many investors are giving Mahathir some space. After all, the country has solid fundamentals - its current-account surplus and 5 per cent-plus growth rates are the envy of many an emerging market - and he's tapped seasoned officials for senior economic roles.

"Markets are taking this in stride," said Richard Jerram, chief economist at Bank of Singapore Ltd. "On Thursday, people were fairly concerned, but since then they've made some appointments and this advisory panel of grey beards they've put together has given some reassurance. The incoming finance minister has a pretty solid track record."

Among the appointments offering investors some confidence: Lim Guan Eng, who for a decade has led the northern state of Penang - known for luring technology investment from abroad - is Mahathir's pick as finance minister Zeti Akhtar Aziz will serve on Mahathir's advisory council. She left a legacy of discipline and professionalism as central bank governor for 16 years. Daim Zainuddin served twice as finance minister and will also be on the panel.

Most cabinet appointments remain unfilled, and Lim hasn't been sworn in. Concerns remain about abandoning a goods-and-services tax, which could widen a fiscal deficit that's shrunk in recent years. The new coalition government has also shown some early strains, never having served in office after ousting a party that had run Malaysia since 1957. 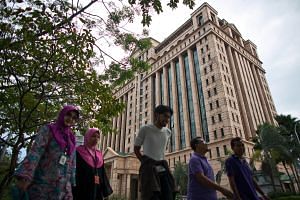 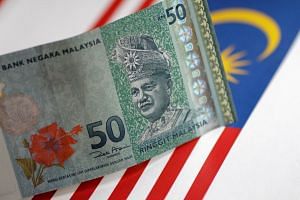 With a large foreign holdings of Malaysian local bonds leaving the currency vulnerable to shifts in sentiment, Goldman Sachs Group strategists are reviewing their ringgit forecasts. They had previously projected the currency to strengthen to 3.8 per dollar in six months. It was around 3.95 at 9:16am in Kuala Lumpur on Tuesday.

One hurdle for Malaysian assets is that, amid a broader stress test for emerging markets thanks to the increase in benchmark dollar yields, they had been outperforming ahead of the Wednesday election. The ringgit was the best performer in Asia against the dollar, after the safe-haven yen, this year through Wednesday. It's now slipped to third, after China's yuan.

In stocks, too, Malaysia has stood up nicely: "Malaysia has traded at a premium to peers given its stability, high economic growth and liquidity," AC Tan, head of research at CLSA Ltd. in Kuala Lumpur, wrote in a note after Wednesday's election. "That said, we believe the market could take a breather as investors assess the incoming government."

Mahathir, 92, has a long history with investors, having served as prime minister from 1981 to 2003. He stood up to traders betting against his country in the 1997-98 Asian financial crisis, imposing capital controls, and berated the legendary George Soros as a "moron." As recently as 2010, he told Bloomberg that currency trading was "silly," reflecting his preference for the bygone era when exchange rates were fixed.

This time around, though, Mahathir needs to work with Anwar Ibrahim - his onetime protege, onetime political enemy and current ally - the de facto leader of the party that forms the biggest part of the coalition. Anwar backed market-set exchange rates in the 1990s and 2000s, and is poised to join the cabinet in some capacity, once a pardon frees him from jail over a sodomy conviction. And Mahathir has pledged to be business and market friendly.

"If he does keep to that principle, we can look past some of the campaign promises now and what we'll still see is a still-vibrant Malaysia," said Vishnu Varathan, Singapore-based head of economics and macro strategy at Mizuho Bank Ltd.

Varathan said the ringgit could tumble to as low as 4.10 per US dollar before rebounding to 3.80 as investors get a handle on Malaysia's fundamentals, which include tail winds from high oil prices that should support the current-account surplus.

"Mahathir has got so much experience - he knows to keep the economy buzzing is the most important thing," Varathan said. "The bigger risks are whether the current coalition can agree to the cabinet makeup."