SINGAPORE - Keppel Telecommunications & Transportation (Keppel T&T) shares surged at the opening bell on Friday (Sept 28), while M1, Singapore’s smallest listed telco, roared to near the top of the actives list, in a feisty return to trading after both stocks called trading halts at the start of the week.

Keppel Corp and Singapore Press Holdings (SPH), which owns The Straits Times, had revealed on Thursday their plans to take over M1 with a pre-conditional voluntary general offer of $2.06 a share, even as Keppel Corp separately announced that it would privatise Keppel T&T at $1.91 a share.

M1 shares jumped above the offer price to $2.13 at the open. The counter went into the midday trading break up by 46 cents, or 28.22 per cent, to $2.09. It was the second-most active stock on a churn of 21.6 million shares on Friday, more popular than even blue chip telco Singtel.

RHB Securities said in a report on Friday morning that it believed the M1 offer to be fair, and “at an attractive premium”, based on the telco’s enterprise value-to-earnings before interest, tax, depreciation and amortisation ratio of nine times.

The offer “presents an opportunity for minorities to exit, given intense competition in the market, which portends downside risks to M1’s earnings and dividends”, it said.

CGS-CIMB analyst Foong Choong Chen upgraded M1 from “hold” to “add”, writing in a Thursday note that the offer is likely to go through even if Malaysian carrier Axiata Group, which is the largest single shareholder in M1, does not accept the deal.

But OCBC Investment Research analyst Joseph Ng said that his team has not ruled out the possibility of either a hike in the M1 offer price or Axiata launching its own offer, based on Axiata’s statement that it would “evaluate options available” for its stake. 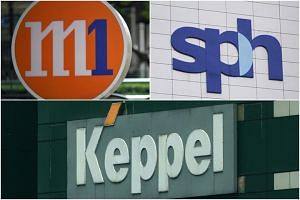 Meanwhile, UOB Kay Hian called both offers “fair”, in a note on Friday morning, and urged shareholders to accept them.

Analyst Jonathan Koh said that M1 shareholders could “avoid a painful period of intense competition and (average revenue per user) erosion” if they tendered their shares to the offeror ahead of TPG Telecom’s arrival in the Singapore market.

“We expect the consolidation of the mobile industry from four to three players to materialise in 2021 or beyond,” he added. “Holding on to M1 shares would subject investors to a long wait before industry consolidation materialises.”

“The deal is at a 26.5 per cent premium to our fair value of $1.51, and likely reflects the future value of its data centre project pipeline,” he said. “The offer gives investors the chance to cash in on the potential now, rather than await its execution over a longer period.”

The team of UOB Kay Hian analysts wrote, in a reference to mafia movie The Godfather, that Keppel Corp was making “offers you can’t refuse”.

OCBC’s Mr Ng said: “As we understand, SPH would be looking to leverage M1’s mobile platform to offer on-demand and ready digital content.

“Nonetheless, we note that the anticipated transformation... could see dividends from M1 being affected, not only because of the competitive landscape, but also due to the allocation of resources as part of the transformation efforts.”

CGS-CIMB analyst Ngoh Yi Sin told BT on Thursday evening that the house is neutral about the impact of the deal on SPH “as we see little strategic reason for additional investment in M1”, but added that it could be “slightly earnings-accretive” if SPH manages to hike its effective stake in M1 to the maximum 16.13 per cent.

Its balance sheet “is still healthy and should not have issues funding the potential $51 million investment needed”, she added in an e-mail.