SINGAPORE - Keppel Corp said on Thursday (Sept 27) that it plans to privatise Keppel Telecommunications & Transportation (Keppel T&T) with a $1.91 per share cash offer.

The diversified business conglomerate said this would give shareholders of Keppel T&T an opportunity to realise their investment at an attractive premium of about 40 per cent over the company's one-month volume weighted average price of $1.365.

"The proposed scheme is consistent with Keppel Corporation's strategy to simplify the Keppel group's corporate structure, with a view to improving capital allocation and better aligning Keppel T&T's interests with the rest of the group," it said in a media release.

On Thursday, Keppel Corp also announced that it, together with Singapore Press Holdings (SPH), would be making a pre-conditional voluntary general offer of $2.06 per share for the remaining M1 shares they do not own.

Keppel Corp said as Keppel T&T would remain a shareholder of M1, the proposed privatisation scheme gives Keppel T&T's minority shareholders an opportunity to realise their investment in Keppel T&T for cash at a compelling premium.

Mr Loh Chin Hua, chief executive officer of Keppel Corp, said that the offer for M1 is in line with its mission as a solutions provider for sustainable urbanisation. 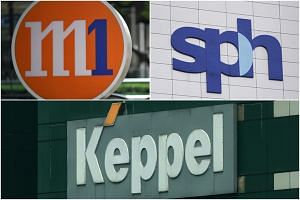 SPH and Keppel to make general offer for rest of M1

"Keppel Corporation has increasingly been transforming its traditional B-to-B business to include retail customers in gas, electricity and urban logistics. Incorporating M1's capabilities and two million customers in a combined digital platform would provide opportunities for synergies and cross selling of services."

Mr Loh noted that Keppel and SPH have been long-term shareholders of M1 since the 1990s. "Notwithstanding the challenges currently facing the industry, we see considerable potential in M1 and have developed a transformation plan to sharpen M1's competitiveness. Through majority control, we would, together with SPH, be better able to support M1's management to drive changes and create greater value in the company."

However, he said the transformation of M1 was a complex undertaking that would take several years. Hence, the offer allows M1 shareholders who are not prepared to wait and bear the related risks to realise their investment in M1 upfront.

The meeting is expected to be convened in the first quarter of 2019.

The scheme will also require the approval of the High Court of Singapore. Keppel Corp will be required to abstain from voting.