Net loss from continuing ops surges to $439m for quarter

BEIJING • JD.com Inc posted a blowout loss due to increased spending and said investments in technology and logistics could affect profit forecasts for the rest of the year amid rising competition in China's e-commerce market.

The net loss from continuing operations surged to 2.2 billion yuan (S$439 million) in the quarter that ended in June, about eight times larger than analysts expected. The Beijing-based company expects sales in the current quarter of between 104.5 billion yuan and 109 billion yuan, with the top of the range slightly below estimates.

The online retailer is facing challenging times as it pushes ahead with an ambitious expansion in foreign and domestic markets. The e-commerce giant is squaring off against Amazon.com in South-east Asia and the West, while facing rising pressure from rivals including Alibaba Group Holding and Pinduoduo Inc at home.

Its stock has fallen by about a third since reaching a record in January.

"June was a heavy spending quarter and it's obvious they had to respond to promotions that just about everybody is doing," Kim Eng Securities analyst Mitchell Kim said. "You saw that with Vipshop and most likely you'll see that in Alibaba's results next week as well - these promotions eat away on gross margins." 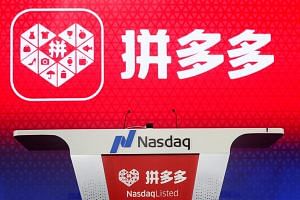 Crazy rich Asians are so yesterday in China

While JD has split out a logistics asset management company it expects will generate material revenue that could eventually balance out the ramped up investments, "the monetisation could happen by next year so then it will impact our overall bottom-line forecast for this year", Mr Huang said.

Sales for the second quarter rose 31 per cent to 122.3 billion yuan. One factor that likely weighed on growth was a slowdown during JD's June sales event. Ostensibly started to celebrate the company's founding, it has become a smaller rival to Alibaba's Singles' Day promotion in November, with total transactions for this year's event rising by 33 per cent to hit 159.2 billion yuan.

But this was down compared with the 50 per cent growth of last year, in part because the attention of shoppers was diverted by a public holiday and the 2018 Fifa World Cup.

Mr Huang said JD's third quarter revenue guidance was hurt by slower sales between the last week of June and July, thanks in part to the end of the promotion, but added that business had started picking back up this month.