SINGAPORE (BLOOMBERG)- The sell-off that struck the US overnight ripped through Asian stock markets on Thursday (Oct 11), with indexes in Japan and Hong Kong tumbling at least 3 per cent.

All stocks listed on the Nikkei 225 Stock Average retreated, while Japan's Topix index headed for its steepest decline since March. The Hang Seng Index and China's Shanghai Composite fell more than 3 per cent each. Taiwan's Taiex index led the rout with a 5.6 per cent slump.

The MSCI Asia Pacific Index headed for its worst day since February, with the measure sliding 3.1 per cent. Turbulence spiked in Asian markets as the Nikkei Stock Average Volatility Index surged 45 per cent.

"It's just a beginning," Banny Lam, head of research at CEB International Investment Corp, said by phone. "The US tech bubble may take a while to burst and we are facing many external uncertainties - trade wars, risks in emerging markets currencies and oil price. And people should also watch yuan closely."

The regional benchmark gauge has slumped 12 per cent this year as uncertainties such as the US-China trade war weigh on investor sentiment. The Shanghai Composite Index has lost 20 per cent in 2018, while Japan's Topix is down 6.4 per cent.

The S&P 500 Index sank 3.3 per cent on Wednesday for its biggest drop since February, while the Nasdaq 100 Index tumbled 4.4 per cent, setting the tone for a day of losses in Asian equity markets.

"The sharp sell-off in the US likely caught no-one by surprise," said Paras Anand, head of asset management for Asia Pacific at Fidelity International. "If anything, market participants have been wondering how, in the face of tighter money, a tighter labor market and rising oil prices, the US has continued to be so resilient." 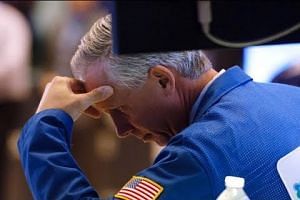 Investors are turning their attention to Chinese trade data due Friday for a read on whether the trade dispute is seeping through in the data. They'll also be keeping an eye on inflation data scheduled for Thursday in the US.

"Asia is like a leveraged play on the US market and the global trade situation right now, that's not going to change until a deal is reached between the two largest economies in the world," said Olivier d'Assier, head of applied research for the Asia-Pacific region at Axioma. For emerging markets, "the trifecta of a falling US market, higher US interest rates, and a stronger dollar is a deadly combination so they are likely to remain under pressure."

Here's what investors and analysts are saying about the sell-off:

GOING TO GET WORSE

"I think this is going to get worse before getting better," said Nader Naeimi, head of dynamic markets at AMP Capital Investors Ltd. "We are not buying the dip yet. We are staying with our core value positions including energy and banks, but have significant cash buffers and significant long the Japanese yen."

"We believe that ongoing structural deterioration in US-China relations is likely to result in higher volatility in Asia going forward," said Ross Cameron, head of the Japan office at Northcape Capital Ltd. "Volatility should be positive for active investors and stock pickers, as more opportunities arise to buy undervalued companies."

"The latest drop is reminiscent of February's selling, which saw its recovery assisted by positive earnings results," said Jingyi Pan, a market strategist at IG Asia Pte. "As for the upcoming earnings season commencing with major US banks on Friday, the outlook is rather mixed thus adding to the uncertainty. It will be one worth watching for aid to the market given the proximity and it will be difficult to rule out further decline in the market absent positive factors."

"We haven't reached a crisis scenario," said Lam of CEB International. "After all, corporate fundamentals are not that bad. It's all because of these external uncertainties. Yes the economic data - especially from China - may show some slowdown in the near future but the situation is still far away from a hopeless crisis."