Investors on edge over trade issues took another hit yesterday when Huawei Technologies' chief financial officer (CFO) was arrested in Canada over potential violations of United States sanctions on Iran.

Needless to say, the arrest provoked outrage from Beijing and might complicate the already testy relationship between the world's two biggest economies just as it was showing signs of improving.

The news weighed heavily on key Asian indexes, with the Nikkei, Hang Seng, Shanghai Composite, ASX 200, Kospi and Kuala Lumpur Composite all down.

Genting Singapore was the most active index-listed stock on the day. It closed 1 per cent lower at $1 on turnover of 27.6 million units. 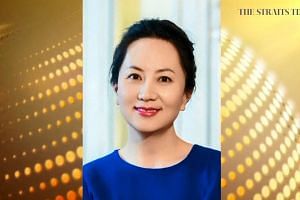 Banking stalwart UOB was the index's biggest loser in percentage terms, dropping 2.8 per cent to $25.02. Hongkong Land Holdings was the STI's biggest gainer, adding 0.6 per cent to US$6.54.

While most counters on the index ended lower, shares in property player CapitaLand were among the bright spots, rising 0.9 per cent to $3.23.

CMC Markets analyst Margaret Yang said: "Markets are also likely to stay cautious ahead of next Tuesday's House of Commons Brexit vote to decide the UK's future after the European Union.

"Political and trade uncertainties are likely to suppress risk appetite for the next couple of days."

Hong Kong stocks again bore the brunt of the dipping sentiment, with the benchmark index falling by as much as 3 per cent before closing 2.5 per cent lower. Tech stocks, Huawei's suppliers, were especially badly hit. Ms Yang noted that most of these companies are listed in China, Hong Kong or the United States.

Tokyo shares were also weighed down by a weaker US dollar against the yen.