The MSCI Hong Kong Index fell 3 per cent, heading for a 10th straight decline, a day after a general strike led to traffic chaos, violence, tear gas and flight cancellations. The last time Hong Kong stocks had such a long losing streak was June-July 1984, five months before the UK and China signed the Sino-British Joint Declaration for the handover of Hong Kong in 1997.

The benchmark Hang Seng Index - which includes shares of Chinese companies earning in yuan - was down 2.3 per cent at 25,548.73 as of 10:44am, erasing all its gains for the year.

Hong Kong business confidence, already strained by the trade war, faces fresh challenges as street clashes damp spending and deter tourists. Officials from the Hong Kong and Macau Affairs Office in Beijing plan to speak to the media and make a new announcement on Tuesday, according to a report in the South China Morning Post.

"Investors are still very worried and the situation is not getting better," said Linus Yip, chief strategist at First Shanghai Securities. "The selling pressure is still big. Fears include the escalating trade war, depreciating yuan and the local political situation. I think 25,000 is a key level for Hang Seng, and losing this support level would cause extra selling pressure."

Mainland stocks were also lower, with the benchmark Shanghai Composite Index tumbling as much as 3.1 per cent and the CSI 300 Index dropping 2.7 per cent.

The yuan's plunge past 7 per dollar has intensified concerns about the US-China trade war and prompted the Trump administration to formally label China a currency manipulator. The onshore and offshore currencies recovered some ground Tuesday after a stronger-than-expected fixing. 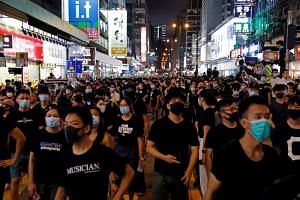 Hong Kong's currency also reflected the sense of anxiety. The Hong Kong dollar's 12-month outright contracts jumped above 7.85 - the weak end of the currency's trading band - for the first time since 2016 on Monday, while the spot rate fell 0.25 per cent, the most in more than three-and-a-half years. The Hong Kong dollar pared some losses Tuesday, strengthening 0.10 per cent to 7.8388 per US dollar.

It's "about panic caused by RMB's sharp depreciation, political uncertainty and re-escalation of the trade war," said Carie Li, an economist at OCBC Wing Hang Bank. "The market has become more sensitive to potential outflow risk and therefore is preparing for that by hoarding cash or hedging against that by paying up the forward swap points."

Technology firms and developers were among the biggest decliners on the Hang Seng Index. Hang Lung Properties Ltd fell 5.5 per cent and AAC Technologies Holdings Inc dropped 4.2 per cent. A Bloomberg gauge of Macau casino stocks slid 3.8 per cent, taking its nine-day loss to 18 per cent.