HONG KONG (BLOOMBERG) - One of Hong Kong's safest stock bets is veering off the tracks.

MTR Corporation Ltd has the best risk-adjusted return of any Hang Seng Index member this year, data compiled by Bloomberg show. Shares of the government-owned rail operator, a stable dividend payer relatively immune to the US-China trade dispute, hit a record high on July 18 after rallying 35 per cent from the start of 2019, with volatility well below peers. They've tumbled more than 10 per cent since.

The drop coincided with an escalation in anti-government protests and violent clashes in Hong Kong, including in underground stations and on trains. Demonstrations have run for nine straight weekends. A general strike hit the city Monday, disrupting train services on the morning commute. The share slide also came right after the company reported a HK$2 billion (S$352.4 million) provision for a troubled rail project.

The provision and the protests, which analysts say could hurt MTR's retail and property businesses in addition to disrupting train services, have presented investors with a reason to sell the shares on a high.

"The stock has rallied too much - some investors may consider it expensive and have found excuses to sell," said Jackson Wong, asset management director at Amber Hill Capital Ltd. "Since MTR has enough buffer to cope with the provision, it's the political situation that looks more worrying to investors."

Hong Kong has been rocked by increasingly violent unrest since the government tried to push through an extradition bill in early June. Train stations have become a focal point for protesters, who've disrupted services by blocking carriage doors and pressing emergency buttons. 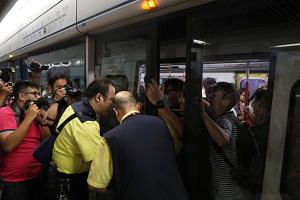 Analysts have trimmed their 2019 earnings estimates for MTR by 7 per cent in the past four weeks, the second-biggest cut among all Hang Seng Index members, according to data compiled by Bloomberg. The company is due to report interim results this Thursday, and options are implying shares will move more than usual afterwards.

Morgan Stanley downgraded the stock to underweight on July 18 after MTR announced the provision for its Shatin-Central rail project. Analysts including Hildy Ling said the provision would be an overhang until the first half of 2020, and that investors would likely take profit after its strong performance year-to-date.

Some analysts are more comfortable with the stock: Michael Wu at Morningstar Inc upgraded MTR to hold last Thursday, having downgraded it to sell on July 12 after his financial models suggested this year's rally was excessive.

"The impact of the political situation could be short-term," Wu said by phone. "MTR has been a defensive bet" as investors turned more risk averse to chase yield.

Even after last fortnight's slide, MTR is trading at around 24 times forward earnings, 12 per cent above the average level in the past decade, according to data compiled by Bloomberg.

"If the protests don't end, they will eventually hurt Hong Kong's property prices and drag MTR further down," Amber Hill's Wong said. "I wouldn't recommend investors own MTR until the social disruptions end."