It is slow progress but there has been a slight improvement in the level of female representation on the boards of listed firms here.

The proportion of all-male boards also fell slightly - from 55 per cent three years ago to 50 per cent last year, according to the Diversity Action Committee (DAC) yesterday.

The top 100 primary-listed companies led the way, with women making up 13.1 per cent of their boards, up from 10.9 per cent in 2016. This represented the highest increase over the past three years.

Yet, Singapore still trailed other countries, with Norway and France both having a female board representation of 42 per cent among listed firms. Britain had 27.6 per cent, Australia had 26.1 per cent, and the United States had 21 per cent.

Within Asia, the levels were lower. Women had a 19.2 per cent share of board seats among the top 100 listed firms in Malaysia.

Hong Kong fared slightly better than Singapore at 13.3 per cent, while China, Japan and South Korea were among the countries with the least diversity.

The DAC found that new board seats were still mostly filled by men.

About 40 per cent of directors appointed over the past three years were first-time directors, debunking the notion that companies prefer experienced directors.

But most of these new appointees were men - this was the case for about 70 per cent of the top 100 primary-listed firms and more than 80 per cent for all listed companies.

The DAC said proposed revisions to the Code of Corporate Governance present opportunities to address this diversity imbalance.

The Corporate Governance Council has proposed a rule that will reassess whether an independent director still qualifies as independent after nine years in the role.

About 41 per cent of the top 100 companies have at least one independent director who has served nine years or more. That means 101 directorships will need to be renewed if the new rule kicks in.

Similarly, 45 per cent of all Singapore Exchange-listed companies have at least one independent director who has been in the position for nine years or more.

There are 648 such directorships, with the longest tenure spanning 46 years. 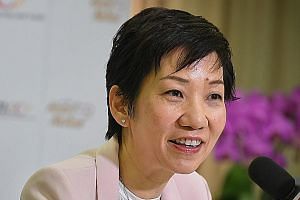 The $ question women workers must ask

The public consultation on the revised code closes on March 15.

DAC chairman Loh Boon Chye said: "The numbers are encouraging. Boards of leading companies are paying attention to the benefits that diversity brings.

"With our large companies leading the way, DAC is ambitious for the other companies, too, to make appointments that will strengthen their boards and the resilience of their strategies."

Mr Loh, who is also chief executive of the Singapore Exchange, added that the proposed revisions to the corporate governance code pay specific attention to board diversity.

The DAC, an 18-member committee comprising corporate leaders from various sectors, was formed to address the under-representation of women in boardrooms.