(REUTERS) - Gold held steady on Thursday (Aug 8), hovering near the key psychological level of US$1,500, supported by uncertainties around Sino-US trade war and a slew of interest rate cuts by global central banks amid fears of an economic slowdown.

"The moves by central banks around the world are very important, and the focus we are getting on currency markets for potential for competitive devaluation remains supportive for gold," said Michael McCarthy, chief market strategist, CMC Markets.

"There is an important resistance zone around US$1,525. Given the speed of the rise in gold prices, we may have to see some period of consolidation before there is any test of that higher level."

Chicago Fed President Charles Evans signalled on Wednesday he was open to lowering rates to bolster inflation and counter risks to economic growth. 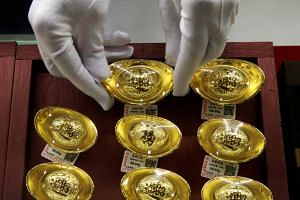 Gold tops US$1,500 as investors seek shelter from gathering storm

Gold - the answer to the new norm of market disruption

Interest rates futures suggested traders are building bets that the Federal Reserve would cut rates three more times by this year-end to avert a recession.

In a further indication of an economic downturn, central banks in New Zealand, India and Thailand surprised markets with aggressive easings on Wednesday. The Philippines central bank is expected to cut rates later today.

Meanwhile, the dollar index inched down 0.1% after falling to a two-week low earlier this week. US 10-year Treasury yields dropped further below three-month rates, an inversion that has reliably predicted recessions in the past.

Asian shares were trying to rally on Thursday as Beijing reported better trade numbers while also limiting the fall in its yuan, offering temporary relief from fears of a global currency war.

"We still think that gold could likely push higher over the short-term," INTL FCStone analyst Edward Meir said in a note.

"But it will have to tee off from more turmoil in the financial markets as opposed to the relative calm we have been seeing over the past 48 hours."

Spot gold may gain further to US$1,524 per ounce, as it has cleared a resistance at 1,497, according to Reuters technical analyst Wang Tao.

Elsewhere, silver rose 0.1% to US$17.11 per ounce, hovering near a more than one-year high touched in the previous session.