SINGAPORE (BLOOMBERG) - Gold is rallying into the end of 2018 as turmoil in global equities, the partial US government shutdown and concerns about the outlook for next year stoke demand, lifting prices to the highest in six months.

Bullion rose in early trade in Asia on Wednesday (Dec 26) before levelling off, with the metal on course for the biggest monthly advance since August 2017. Money managers are the most bullish on prices they've been in half a year.

The metal is proving to be a beneficiary of the selloff that's engulfed global equities after US shares tanked on Monday followed by losses in Asia on Christmas Day. Investors are turning away from risk amid further signs of dysfunction in Washington, with multiple sources of concern including US President Donald Trump's showdown with the Federal Reserve, the impasse over the budget, and fall-out from the resignation of Defense Secretary James Mattis.

"Overall the latest move on gold should be a stark reminder to investors that gold in any form should be an essential part of any long-term investment strategy, as again the yellow metal has proven its weight when markets turn turbulent," said Stephen Innes, head of Asia-Pacific trading at Oanda Corp.

Holdings in gold-backed exchange-traded funds have ballooned as shares fell, and investors priced in expectations for fewer US interest rate rises in 2019. They hit 2,187.2 tonnes on Dec 25, up more than 100 tonnes since mid-October.

"This Christmas season, we have massive volatility in US stocks and the Nikkei sank into a technical bear market," said Huatai Futures Co's Xu Wenyu. "The US government shutdown has added to the market's list of worries." 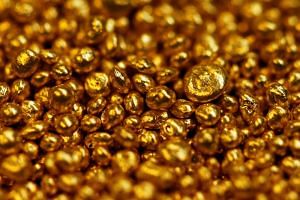 Indians buying gold for as little as 2 cents online

Nine of 15 federal departments and dozens of other agencies shut down on Saturday after Trump refused to sign a spending bill that didn't include money for a wall along the southern border. Congress has left Washington until Dec 27, delaying negotiations to end the shutdown.