Go-Jek, Indonesia's most valuable technology start-up, is in talks to raise at least US$2 billion (S$2.7 billion) to fuel an accelerated expansion overseas, according to a person with direct knowledge of the matter.

The Jakarta-based company plans to close the funding round in several weeks, the person said, asking not to be identified because the information is private. The start-up's existing backers include Tencent Holdings, Temasek Holdings and Warburg Pincus.

Go-Jek is building up its arsenal to expand in South-east Asia and fight Singapore-based rival Grab, which bought Uber Technologies' business in the region and has said it is on track to raise US$3 billion in fresh capital this year.

The Indonesian company got its start with ride-hailing and has since added a range of on-demand services that lets users pay bills, order food and buy movie tickets.

"There is an element of a land grab, not just in geography but also in different verticals, whether it's delivery or payments, as everyone's trying to put his stick in the ground," said managing partner Kuo-Yi Lim at Monk's Hill Ventures in Singapore, which is not an investor in either company. "There's also a bit of an arms race going on" in capital raising between the two rivals.

A Go-Jek representative declined to comment. Go-Jek has turned to acquisitions in recent years to build a group of leaders overseeing different businesses.

"We are building a strong bench who really want to make a change in Indonesia and in South-east Asia as we expand," Go-Jek president Andre Soelistyo told a panel at the Milken Institute Asia Summit last Friday. 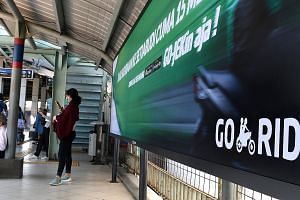 Go-Jek says it has not started recruiting drivers in Singapore, warns against online 'recruitment forms'

Go-Jek was founded in Jakarta and has been expanding beyond the Indonesian market it dominates. It began motorcycle hailing and courier delivery services in Hanoi on Sept 12 after a soft launch in Ho Chi Minh City.

Go-Viet, its brand in Vietnam, is the first of the company's international operations. The app has been downloaded 1.5 million times in six weeks and 25,000 drivers have joined the platform, according to the company. Go-Viet plans to roll out additional services such as car-hailing, food delivery and e-money services in a country that is home to more than 90 million people.

"Consumers need more choice and the market needs more competition to allow the industry to grow sustainably," Go-Jek chief executive officer Nadiem Makarim said in a statement on Sept 12. Go-Jek's planned expansion in Thailand, Singapore and the Philippines is on track, the company said.

The Indonesian start-up's last funding round brought in about US$1.5 billion of new capital and valued the company at roughly US$5 billion, Bloomberg News has reported.

A version of this article appeared in the print edition of The Straits Times on September 18, 2018, with the headline 'Go-Jek said to be in talks to raise $2.7b in funding'. Subscribe
Topics:
More
Whatsapp Linkedin FB Messenger Telegram Reddit WeChat Pinterest Print Purchase Article Copy permalink