NEW YORK (AFP) - Ford plans to cut 7,000 jobs, or 10 per cent of its global salaried workforce, as part of a reorganisation as it revamps its vehicle offerings, the company said on Monday (May 20).

The downsizing will involve some layoffs and reassignments of white-collar staff and should be complete by the end of August, a Ford spokeswoman said. Ford has been phasing out most sedan models in the United States as more consumers have opted for pickup trucks and sport utility vehicles.

The move, which began last year and follows some job cuts announced earlier in other regions, will lead to 800 layoffs in North America in total, including about 500 this week, said Ford spokeswoman Marisa Bradley.

The company has yet to determine all of the specifics in other regions, she said.

The actions, expected to save about US$600 million a year, come as Ford ramps up investment in electric cars and autonomous driving technology, eyeing future growth in those businesses even as current profitability is tied closely to sales of conventional vehicles in North America, including its best-selling F-150 pickup trucks.

"To succeed in our competitive industry, and position Ford to win in a fast-changing future, we must reduce bureaucracy, empower managers, speed decision making, focus on the most valuable work and cut costs," chief executive Jim Hackett said in an email to employees. 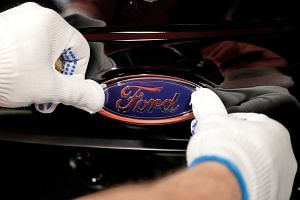 No-deal Brexit would cost Ford up to US$1 billion

Ford told Britain's May it is preparing alternative production sites: The Times

General Motors to lay off about 4,000 salaried workers: Source

Ford in March announced it would eliminate more than 5,000 jobs in Germany. Bradley said Monday's figures included salaried staff in Germany affected by that move but that some of the figures in the German announcement related to hourly staff.

Ford also previously announced moves to exit the commercial heavy truck business in Brazil, restructure its Russia operations and cease production at two plants in that country while ending production at a plant in Bordeaux, France.

Ford had signaled it expected significant job cuts in April 2018 when it announced it would phase out several small models in North America.

"As we have said, Ford is undergoing an organisational redesign process helping us create a more dynamic, agile and empowered workforce, while becoming more fit as a business," Ms Bradley said.

"We understand this is a challenging time for our team but these steps are necessary to position Ford for success today and yet preparing to thrive in the future."

The GM announcement drew heavy criticism from US and Canadian politicians, including US President Donald Trump. Earlier this month, GM said it was in talks to sell an Ohio plant to Workhorse, a Cincinnati-based company that focuses on producing electric delivery vehicles.