After establishing itself as a manufacturer of memory modules, local firm Strontium realised growth was stagnating and it was time to venture into new markets. Xin Yun finds out how it pulled off this feat #SgGoesGlobal Transformation. Innovation. Entering new markets. This 10-part series showcases Singapore companies that have embraced change and gone global to capture sustainable growth.

Home-grown firm Strontium Technology started out producing memory modules for PCs, before moving on to become a PC and flash memory manufacturer, but now its ambitions have a global reach.

The dream is to have its corporate logo - which was revamped in 2010 and is a stylised silhouette of an elephant - be instantly recognisable in 100 countries by 2020.

President and chief executive Vivian Singh set the goal last year, and wanted to start by entering five countries in Europe, but said it was not easy.

It was a boon that IE Singapore was there to help.

The agency provided Strontium with a subsidy to participate in two trade shows, Distree APAC (Asia- Pacific) in 2013 and Distree EMEA (Europe, the Middle East and Africa) in 2014.

The firm has attended both events every year since, also with IE's support.

Distree is a major infocomm and communications technology (ICT) and consumer electronics event that is held in several regions around the world annually.

He said participating in the Distree events has allowed the firm to meet many existing and new customers.

"Meeting with existing customers helped to increase business with them, and we added at least 10 new customers in Europe who are buying regularly."

The firm now sells its products in 45 countries, mostly in the Asia-Pacific, the Middle East and Africa, up from 30 last year.

Mr Singh added: "A lot of the new countries we started selling to this year are in Africa, where we see increasing demand for our products."

Strontium has also been participating in IE's Global Company Partnership programme since March. The programme grooms globally competitive companies by helping them develop their manpower, access markets and providing access to financing."(IE has) also introduced many customers, bankers, investors and government agencies in the last two to three years," Mr Singh added.

All this support has been crucial as Strontium has had to keep reinventing itself to keep up with a rapidly changing market.

"PC sales started to slow down in 2009, which is when we moved from dynamic random access memory (DRAM) products to flash products like microSD cards and USB drives."

The firm also had to change the way it sold products.

"We were selling DRAM products to PC manufacturers, system integrators, and DIY channels to other businesses, but flash products needed a focus on retail and e-commerce, which is selling to consumers." 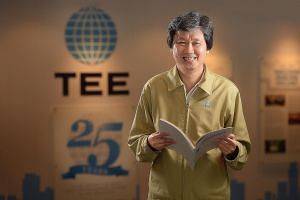 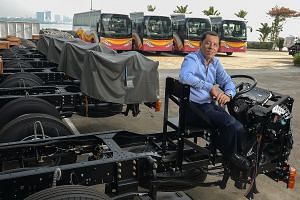 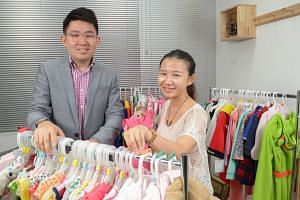 Mr Singh said that the firm is expecting a turnover of $375 million this year, about 20 per cent more than last year, and by 2020, the aim is to grow that to more than $500 million.

Strontium expects the market to change again, which is why it has a "road map" of products.

The firm is designing external solid-state drives (SSDs) - which are faster and more reliable than conventional hard drives as they do not have moving parts - and has already ventured into wearable technologies and the Internet of Things (IoT).

It will release smart jewellery, under a label named Ivy, in India at the end of this month or early August. The jewellery will be able to connect women to their friends and family via SOS messages, for instance, in emergencies.

IE also introduced Strontium to firms in other sectors that sell through similar distribution channels, to learn how to use its brand and channels to create new products.

"For IoT products, there was a lot of preparation. It took us nine months to understand the new technologies, hire staff with prerequisite skills, hire research and development and mobile app companies in India and Taiwan, find new suppliers and factories, and to make the first prototypes for testing.

"One of our senior executives moved out from Strontium to focus completely on IoT products."

Mr Singh added that he expects IoT products to contribute at least 10 per cent of total revenue in 2018, and maybe 95 per cent seven years from now.

A version of this article appeared in the print edition of The Straits Times on July 06, 2016, with the headline 'Exploring new businesses and markets to be the next tech giant'. Subscribe
Topics:
More
Whatsapp Linkedin FB Messenger Telegram Reddit WeChat Pinterest Print Purchase Article Copy permalink