ATLANTA/WASHINGTON (REUTERS) - Aubrey McClendon, former chief executive officer of Chesapeake Energy Corp and a legend in the US energy industry, was charged on Tuesday (March 1) with conspiring to rig bids to buy oil and natural gas leases in Oklahoma, the US Justice Department said.

Chesapeake shares declined 3.6 per cent in after-hours trading on Tuesday to US$2.66. The shares have tumbled more than 80 per cent in the last year amid plummeting oil prices.

Temasek Holdings, Singapore's state investment company, told the Straits Times on Wednesday (March 2) that it had divested entirely its US$500 million (S$700 million) stake in Chesapeake in 2013. Temasek had purchased convertible preferred shares in the company in 2010. 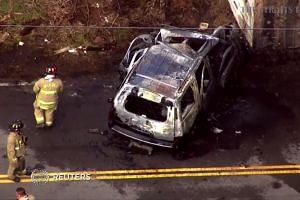 The indictment follows a nearly four-year federal antitrust probe that began after a 2012 Reuters investigation found that Chesapeake had discussed with a rival how to suppress land lease prices in Michigan during a shale-drilling boom. Although the Michigan case was subsequently closed, investigators uncovered evidence of alleged bid-rigging in Oklahoma.

In addition to the federal probe, the Michigan attorney general brought criminal charges against Chesapeake, which the company settled in 2015 by agreeing to pay US$25 million into a compensation fund for land owners.

The Justice Department indictment paves the way for what may be one of the highest-profile criminal antitrust cases against a well-known US CEO in decades, and could thrust McClendon, a controversial figure whose aggressive leasing tactics are legendary in the energy industry, into the highest-stakes legal battle of a decades-long career.

McClendon, is a shale drilling evangelist who was once among the highest paid US CEOs. He co-founded Chesapeake with fellow Oklahoma oilman Tom Ward in 1989. In 2013, McClendon stepped down from the helm of Chesapeake amid a liquidity crunch and corporate governance concerns. Ward left Chesapeake in 2006 and founded competitor SandRidge Energy Inc the same year.

McClendon, who is now with American Energy Partners (AEP), did not immediately respond to telephone calls or an email seeking comment.

Chesapeake itself is unlikely to face criminal prosecution, the company said.

"Chesapeake has been actively cooperating for some time with a criminal antitrust investigation by the Department of Justice regarding past land leasing practices," said Chesapeake Energy spokesman Gordon Pennoyer. "Chesapeake does not expect to face criminal prosecution or fines relating to this matter."

The seven-page indictment alleges that McClendon set up a conspiracy of two energy companies which agreed not to bid against each other in purchasing oil and natural gas leases in northwest Oklahoma from 2007 to 2012. The indictment did not name either company.

The indictment comes at a time when energy executives across America are already facing considerable distress. Oil and gas companies like Chesapeake, SandRidge, and McClendon's new venture AEP, have struggled as the price of oil plummeted by 70 per cent since late 2014.

Both Chesapeake and SandRidge, once storied firms in Oklahoma's oil industry, have recently engaged restructuring experts as they scramble to pay off billions in debt and avoid potential bankruptcy. SandRidge was delisted from the New York Stock Exchange in January, and closed Tuesday at 4 cents per share.

Much of the companies' debt was accrued in the period from 2007 through 2012 when McClendon was allegedly engaged in an antitrust conspiracy, a time when Chesapeake was snapping up millions of acres of land leases nationwide to expand its shale drilling.

McClendon has also been embroiled in a lawsuit with Chesapeake which alleged that he took sensitive company data from his former company to build his new business.

McClendon was charged with one count of conspiracy to rig bids, a violation of the Sherman Antitrust Act, the Justice Department said.

The Justice Department said that McClendon's indictment was the first case in an ongoing federal antitrust investigation into price fixing, bid rigging and other anti-competitive conduct in the oil and natural gas industry.

"His actions put company profits ahead of the interests of leaseholders entitled to competitive bids for oil and gas rights on their land. Executives who abuse their positions as leaders of major corporations to organize criminal activity must be held accountable for their actions," said Assistant Attorney General Bill Baer, head of Justice Department's Antitrust Division.