Former BSI banker Yeo Jiawei was so close to controversial Malaysian tycoon Jho Low that he slept at his apartment, flew on his private jet and even wore his clothes, a court heard yesterday.

The claims arose yesterday as Yeo's previous testimony, including claims over referral fees he reaped and his relationship with Mr Low, came under intense scrutiny by prosecutors.

Yeo claimed that he had never been employed by Mr Low nor had he ever "received a single cent" from the high-living financier.

But Deputy Public Prosecutor Tan Kiat Pheng, in cross-examining Yeo yesterday, pointed to inconsistencies in his testimony about his first meeting with Mr Low. 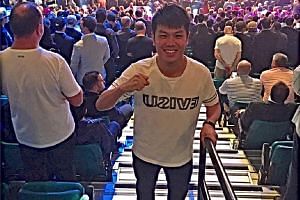 'If we die, we die together', says ex-BSI banker Yeo Jiawei

He also accused Yeo of lying about what he did in Hong Kong before returning to Singapore.

Yeo had testified that he spent several hours at the Hong Kong airport. But DPP Tan said: "You were actually spending that time in Jho Low's house. You slept at his house. And because you didn't have any clothing with you, you even wore Jho Low's clothing. You lied because you're trying to downplay your relationship with Jho Low."

Yeo replied: "I disagree because the prosecution was going to 'up-play' it. Jho Low is just a client of mine."

The prosecution also sought to discredit Yeo's testimony on why the referral fees were paid.

The court was told the true purpose of incorporating two firms that Yeo and his former boss, Mr Kevin Swampillai, beneficially owned was to hide the fact that they were receiving "secret profits".

Prosecutors said Yeo had arranged for these two firms to receive a significant portion of referral fees or "secret profits" for their own benefit.

Under the arrangement, a portion of the management fees paid by 1MDB unit Brazen Sky to fund manager Bridge Partners Investment Management (Cayman) went to a firm called Bridge Global Managers before passing to the companies owned by Yeo and Mr Swampillai.

Mr Tan asked Yeo how these payments could be justified: "I put to you that there was no further necessity to distribute the money downstream" to the firms owned by Yeo and Mr Swampillai.

The prosecution also pointed to inconsistencies in Yeo's testimony regarding the Commercial Affairs Department (CAD).Yeo had testified that he could not recall if the CAD had warned him not to meet with witnesses. But in a statement to the CAD on April 27 this year, Yeo wrote that he had in fact been been warned not to do just that.

Yeo said yesterday that he was "afraid he would get charged" if he admitted to the CAD that he had met Mr Swampillai and Mr Samuel Goh on March 27 after they had been questioned by the CAD.

Yeo was accused of telling Mr Goh on March 27 to lie to the police and claim the funds he transferred to the firms owned by Yeo and Mr Swampillai were his own money.

DPP Tan maintained that Yeo withheld information about the March 27 meeting from the CAD because he was "afraid that his and Mr Swampillai's illicit transactions... would be discovered".