Amicorp relationship manager Jose Renato Carvalho Pinto told the court Yeo's relationship with Mr Low was so close that he travelled on his private jet and accompanied him on his luxury yacht Equanimity on a business trip to the Caribbean.

Yeo stayed at five-star beach-front resort Sandy Lane, one of the most luxurious hotels in Barbados, Mr Carvalho testified. 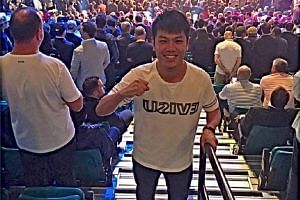 He also claimed Yeo arranged for Amicorp to pay invoices totalling US$1.36 million (S$1.9 million) for 27 tickets for Mr Low, Al-Husseiny and several other celebrities to the Manny Pacquiao boxing match at the MGM Grand in Las Vegas. The cheapest seat was US$30,000, while the most expensive was US$75,000, Mr Carvalho said.

He added Yeo also asked Amicorp to top up the Las Vegas casino membership cards of Mr Low and his close associate, Mr Eric Tan Kim Loong, by at least US$1 million each.

Yeo faces four counts of obstructing justice by allegedly urging witnesses to lie to police and destroy evidence while out on bail after being arrested on March 17 in connection with money laundering.

Al-Husseiny, who is being investigated over offences under the Swiss Criminal Code, was chief executive of IPIC unit Aabar Investments and a former chairman of Falcon Bank, whose licence was withdrawn by the Monetary Authority of Singapore (MAS) last month.

One reason for Falcon's shutdown was because its head office failed to guard against conflicts of interest when managing accounts of a customer linked with Al-Husseiny. The MAS said he misled Falcon's Singapore branch into processing the customer's "unusually large transactions" despite multiple red flags.

Mr Carvalho, who was testifying on the fifth day of the trial, said Amicorp was asked by Yeo to set up trusts and also to open bank accounts for several entities as well as for Mr Low and family members.

IPIC has denied ownership of Aabar BVI, to which 1MDB said it sent US$3.5 billion.

Yeo allegedly told Mr Carvalho that after leaving BSI, he would work as consultant to Aabar and Al- Husseiny and "collect a 5 per cent fee on every invoice to Aabar".

Mr Carvalho also said Yeo claimed that he would be working for sovereign wealth funds that were part of a "highly confidential government-to-government arrangement involving Saudi Arabia and Malaysia". Mr Carvalho learnt that these were 1MDB and SRC International, which was set up by Malaysian Prime Minister Najib Razak's government.

"I thought Amicorp was cheated by Yeo because he created the story of a 'g-to-g' arrangement between countries so he can collect referral fees," Mr Carvalho said.

Mr Samuel Goh, the former head of agency distribution at NTUC Income, testified yesterday that he received more than US$4 million for his role as Yeo's partner in alleged kickback deals linked to 1MDB.