A German chemical giant that has just opened another plant in Singapore believes it can still achieve significant expansion despite the damage the trade war is inflicting.

Evonik chief executive Christian Kullmann said at a news conference here yesterday that the firm sees slower growth in automotive and construction in China, but this is not the case for "less industry-linked" sectors such as healthcare.

The firm sees "good and steady growth" in these areas, he added, ahead of the official opening of Evonik's second methionine plant on Jurong Island.

"We consider Singapore our gateway to extend and expand our businesses, our growth, in the South Asian region," said Mr Kullmann, who expects business performance to pick up in the later part of the year.

Singapore also houses Evonik's Asia-Pacific South headquarters and its first Asia research hub, which focuses on areas such as additive manufacturing as well as smart-surface solutions.

Mr Peter Meinshausen, regional president of Evonik Asia-Pacific South, said he expects the methionine plants, which serve end-markets around the region, to produce at full capacity.

Singapore's position as a trade and logistics hub allows the company to access markets in China, India and Asean as well, he added. 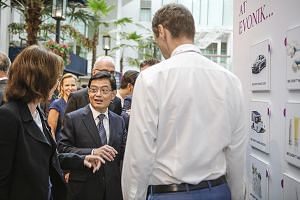 Mr Kullmann told The Straits Times that the erosion of the rules-based, multilateral trading system amid tariff wars and in-creasing protectionism means companies such as Evonik must also consider geopolitics when planning their strategy.

He was confident that the anti-dumping probe announced by China in April into its imports of the amino acid methionine from Japan, Malaysia and Singapore will be resolved.

The investigation is to be completed by April next year.