Technology company Dyson has secured a new site for its global headquarters in Singapore at the historic St James Power Station, as it seeks to expand its presence in the city state after pulling the plug on its electric car project.

Chief executive Jim Rowan told The Straits Times that the company had "very recently" agreed on terms with landlord Mapletree for the waterfront site at 3 Sentosa Gateway, which has been vacant since September last year.

"We have agreed that Dyson will take that whole power station as its global headquarters," he said.

"It's an indication that we are serious about laying down some very deep roots within Singapore."

Dyson declined to disclose the investment sum. ST understands a lease agreement has been signed for the power station, which has a gross floor area of 110,000 sq ft. It was formerly one of the biggest nightlife hubs in Singapore, and was gazetted as a national monument in 2009.

Renovations are under way and Dyson plans to move there in 2021.

With the new HQ, Dyson will double its pool of engineers and scientists here in the next five years, as it ramps up research and engineering in Singapore.

The company's early-stage research - the starting point for inventions and intellectual property - is now mostly done in Britain.

Dyson now employs 1,200 people in Singapore, 350 of whom are engineers and scientists. Its global workforce stands at about 14,000. 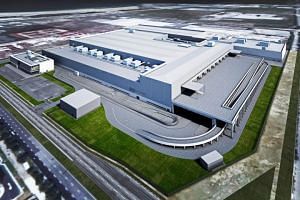 Family office of billionaire James Dyson is hiring in Singapore

Goodbye, St James Power Station: 6 things you might not have known about the iconic nightspot

"The planned doubling of Dyson's engineers and scientists in Singapore to 700 people is also a testament to Singapore's growing attractiveness for high-value innovation activities," Mr Tan told ST.

He said the investment "will create exciting job opportunities", such as in power electronics, energy storage and sensors.

The move comes after Dyson relocated its headquarters from Britain to Singapore in May.

The British company, privately owned by founder James Dyson, saw profits last year jump 33 per cent to £1.1 billion (S$1.9 billion) from 2017, amid soaring demand for its products in Asia.

In October last year, Dyson said it will build its first electric vehicle in Singapore. But the project was abandoned last month as it was no longer "commercially viable".

When St James Power Station is refurbished, it is estimated to have a capacity for about 700 workstations. It will house three levels of technology labs, offices and collaboration spaces. Half of the space will be for research, design and development engineering teams.

Dyson will join several big companies that have offices in the Alexandra precinct, such as Google, tech company Cisco Systems and consumer goods giant Unilever.

ST understands that other companies were also interested in St James Power Station.

In a nod to the building's history, Mapletree will set up a heritage gallery that will be open to the public. The power station was officially opened in 1927 as Singapore's first coal-fired power plant and it was decommissioned in 1976.

Dyson will continue to invest in the United Kingdom. It has two campuses there, Malmesbury and Hullavington, as well as an engineering university.

Mr Rowan said both he and Mr Dyson are excited about having the power station as their new headquarters. "It's got history, it's got great design, and if we can keep the ethos and the attention that was paid to the building when it was first created, and modernise it to make sure it's got all the amenities, then it's the best of both worlds."