NEW YORK (REUTERS) – The S&P 500 and the Dow ended slightly higher on Wednesday (Sept 20), adding to their string of closing records, after the Federal Reserve signalled it expects another interest rate hike by year-end and disclosed timing for reducing its balance sheet.

The Fed left rates unchanged for now, as was widely anticipated, but investors’ expectations changed for December after the US central bank signaled one more rate hike by year-end despite recent weak inflation readings.

In line with expectations the Fed said it would begin in October to cut its roughly US$4.2 trillion (S$5.6 trillion) in US Treasury bonds and mortgage-backed securities holdings by initially cutting up to US$10 billion each month from the amount of maturing securities it reinvests.

Financial stocks jumped after the statement as US Treasury yields rose on the prospect of higher rates while utilities took a fall on concerns that the defensive sector would look less attractive as rates climb.

While some investors said the Fed’s tone was more hawkish than expected others were happy Fed chairman Janet Yellen reiterated her stance that balance sheet reduction would be data dependent.

“The most important thing Yellen needed to communicate to the market was that the bond sale plan and rate increases are not on autopilot,” said Jason Pride, director of investment strategy at Glenmede in Philadelphia.

After the statement traders were betting on a roughly 67 per cent chance of a December hike, compared with 51 per cent minutes before, according to the CME Group’s FedWatch tool.

“Keeping rate hikes where they were was expected. What wasn’t known was the tone. The market reaction is interpreting the Fed as slightly hawkish but not too much,” said Victor Jones, director of trading at TD Ameritrade in Chicago. 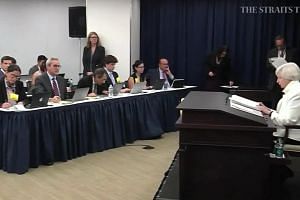 The S&P’s financial sector ended 0.6 per cent higher as banks benefit from higher rates. The sector has risen in eight of the last nine sessions and has clocked a 6.7 per cent gain in that time as investors anticipated the Fed meeting.

The consumer staples sector fell 0.9 per cent while the utilities sector ended 0.8 per cent lower.

Shares of Apple fell 1.7 per cent after it admitted its latest smartwatch has connectivity problems.

Advancing issues outnumbered declining ones on the NYSE by a 1.26-to-1 ratio; on Nasdaq, a 1.30-to-1 ratio favoured advancers.

Roughly 6.7 billion shares changed hands on US exchanges compared with the six billion average for the last 20 sessions.