NEW YORK (AFP) - The Dow finished above 19,000 for the first time on Tuesday (Nov 22), a landmark in a post-election stock rally propelled by expectations of pro-growth policies from Washington.

US stocks have been on an upward ride since the Nov 8 election, when Republican Donald Trump unexpectedly won the White House and Republicans kept control of both branches of the legislature.

Markets are betting that Washington will pursue growth-oriented policies including tax cuts, a ramp-up of infrastructure investments and fewer regulations. 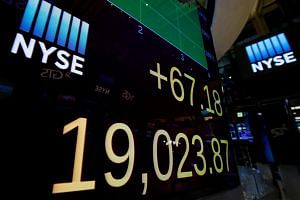 "If you look at the board, you see a lot of stocks, of sectors that are responding to the economic plan," said Peter Cardillo, chief market economist at First Standard Financial. "That's what continues to fuel the rally."

Key blue-chip stocks to gain included Home Depot, which won 2.2 per cent after a report showed US sales of existing homes rose in October at the highest pace in nearly a decade.

Retailers were strong ahead of the holiday shopping season, which kicks off with the annual "Black Friday" sales this week the day after Thursday's Thanksgiving holiday.

But health stocks, which had rallied right after the election, pulled back. Johnson & Johnson shed 2 percent, Celgene 2.6 percent and Merck 1 per cent.

Cybersecurity company Palo Alto Networks tumbled 13.2 per cent as it projected second-quarter revenues of US$426 million (S$606 million) to US$432 million, below the US$438.9 million expected by Wall Street analysts.

Medtronic, a medical device company, sank 8.7 per cent as it reported lower-than-expected sales ahead of new product introductions for treating diabetes and cardiac and vascular ailments.

Dollar Tree surged 8.2 per cent as the discount store chain reported that third-quarter net income more than doubled to US$171.6 million.