2-storey branch with cocktail bar is eatery's first in Europe; another outlet to open in 2019

Around 250 guests have just had their lunch of xiao long bao (steamed pork dumplings) and many other dishes at the restaurant, Din Tai Fung's first in Europe. In a matter of hours, the doors will open to an expectant public.

London was definitely a place where the group wanted to start to grow Din Tai Fung in Europe, said Mr Chu in an interview last week.

Confidently, he added: "I think this store will open very well. We've tasted the food, and overall we are very happy."

He did not have to wait long to find out if the restaurant - the 153rd Din Tai Fung in the world and the first with its own cocktail bar - would be successful. That very evening on Dec 5, despite a persistent bout of rain and wind, there was a long line of Londoners and tourists waiting outside the "no-reservations" restaurant, all eager to be among the first in the British capital to sample the Taiwanese restaurant's signature fare.

"I've visited London many times, and so has my chairman. He travels a lot within Europe, and he too feels that London is a good place to start. I've been to many restaurants here, and Londoners are very welcoming of good food," said Mr Chu, referring to BreadTalk chairman and founder George Quek.

We won't lose any of our identity... Internally, we always tell the team - consolidate current, grow new. 'New' doesn't mean to replace. It's to do it concurrently.

Another Din Tai Fung will open in the middle of next year at London's Centre Point.

Mr Chu said the plan is to focus on London next year before venturing to other parts of England and, eventually, other cities in Europe. 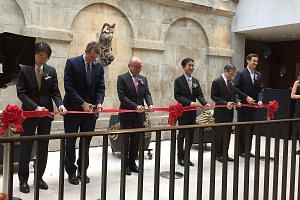 Lunch With Sumiko: BreadTalk's George Quek on conquering the world, one loaf at a time

Mr Chu added that there are plans to bring some of BreadTalk's other brands to the United Kingdom at some point, with a Food Republic food court as one of the possibilities. A BreadTalk bakery is also an option.

"We have to find the brand that's suitable for the palate (in the UK). Again, a lot depends on how well we do (with) Din Tai Fung. London is a 13-hour flight from Singapore, so I need to be sure before I bring another brand to this part of the world," he said.

As BreadTalk continues to spread its wings beyond its traditional bakery business, Mr Chu said the effort to grow its portfolio of offerings is largely in response to market demand. "We won't lose any of our identity. The fact that we are growing, the fact that we are a listed company (on the Singapore Exchange), I think our shareholders are appreciative of that change.

"Internally, we always tell the team - consolidate current, grow new. 'New' doesn't mean to replace. It's to do it concurrently."

A version of this article appeared in the print edition of The Straits Times on December 15, 2018, with the headline 'Din Tai Fung off to a good start in London'. Subscribe
Topics:
More
Whatsapp Linkedin FB Messenger Telegram Reddit WeChat Pinterest Print Purchase Article Copy permalink