HONG KONG (BLOOMBERG) - The beleaguered Chinese company that made news last year paying its bond investors in ham instead of cash has a new problem: It's running low on pigs.

The cash crunch that left Chuying Agro-Pastoral Group Co unable to service some of its debt has now intensified to the point that it's unable to buy enough feed, according to an announcement on the Shenzhen Stock Exchange. The pork producer said that contributed to its pigs' death rate being higher than expected.

It's the latest twist for the small-cap company that's been challenged on multiple fronts, from the spread of African swine fever - which has seen more than 900,000 hogs culled across the country - to an economic slowdown to a deleveraging drive by policymakers that's tightened credit flows to weaker borrowers.

The Zhengzhou, central China-based company revised its 2018 performance forecast to a net loss of 2.9 billion yuan (S$581.9 million) to 3.3 billion yuan, wider than previously anticipated, it said in the statement on Wednesday (Jan 30).

More pain may be looming: Chuying Agro has 2.3 billion yuan of bonds it needs to repay this year, according to data compiled by Bloomberg. A call to the company's securities department went unanswered. 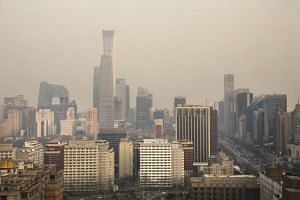 Struggling Chinese firms have been getting innovative in their efforts to appease investors. A financing platform under HNA Group Co offered investors air tickets rather than cash for debt repayment last year.

In Chuying Agro's case, the company said in November that holders of 271 million yuan of its debt agreed to take ham or pork gift packages instead of interest payments. Owen Gallimore, head of credit strategy from Australia & New Zealand Banking Group, quipped that "payment in kind becomes PIH (Pay In Ham)".