SINGAPORE - A new co-working space in the heart of town that claims to operate with military precision is up and running.

The General Room at the TripleOne Somerset building in Somerset Road has been open for about a month, but will have its official launch next month.

It includes a hot-desking area, meeting rooms, an event space and a conference room.

Businesses can list The General Room as their virtual office address with mailing and concierge facilities for $145 a month.

The facility was set up by LGB Somerset Investment, a unit of Malaysia-based LGB Group.

The company said in a statement yesterday: "The General Room extends the persona of a military general and the way a military base is run - with precision, respect and efficiency - into the management of the co-working space." 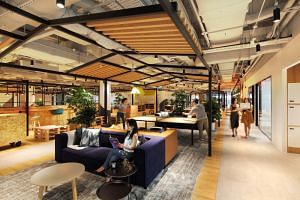 The General Room, which is open to businesses in sectors such as fashion, retail, finance and wealth management, aims to provide a space for greater collaboration and innovation in the financial sector.

LGB Somerset Investment director Lim Chin Sean said: "We will make it even easier and more cost-effective for entrepreneurs and family offices to start their first company."

He added that there is a critical mass of financial firms in Singapore, such as start-ups, consultancies and mid-sized agencies, that may find the space suitable.

Property consultant Edmund Tie & Company said there were about 110 co-working spaces in Singapore as of the end of May, amounting to about 1.1 million sq ft. That will have expanded to about 1.4 million sq ft by the year end.

Some operators have sought to differentiate themselves in the increasingly saturated market.

The Carrot Patch in Henderson Road, for example, has recreational facilities that aim to appeal to young start-ups and student entrepreneurs. It also targets the tech crowd, hosting events that deal with topics such as blockchain and cryptocurrency.

Trehaus, in Orchard Road, brands itself as the first family-friendly co-working space with childcare and learning facilities.

The Great Room, which has three offices - in Temasek Avenue, George Street and Orchard Road - has sleek, modern and finely crafted furniture inspired by hotel lobbies.