HONG KONG (BLOOMBERG, REUTERS) - Tujia.com has raised US$300 million at a valuation of more than US$1 billion, as the Chinese vacation rentals site often compared with Airbnb Inc. pursues financing to bankroll a global expansion.

Investors in Tujia's latest round of financing include The Ascott Ltd, a serviced residence business owned by Singapore-listed CapitaLand, which will inject US$50 million. The Ascott will also form a US$40 million joint venture with Tujia to operate serviced apartments in China. CapitaLand, Southeast Asia's largest property developer, aims to add 6,000 new units in China by 2020, up from the 14,000 it owns there now. 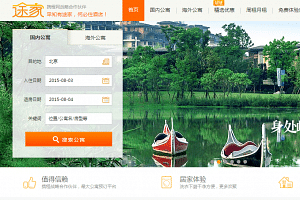 Tujia, which means "home on a journey," is focusing on expanding its services into Asian destinations popular with Chinese travelers, Melissa Yang, the co-founder and chief technology officer, said in an interview. Tujia expects to list 400,000 to 500,000 properties for rent by year's end, from more than 300,000 now, she said.

"We are speeding up our expansion to meet the demands of Chinese tourists," Ms Yang said Monday by phone. "Southeast Asia is a destination favored by Chinese tourists and so that's an area of focus for us."

Its main target markets include Thailand, Indonesia, South Korea, Taiwan and Hong Kong, though the startup already connects homeowners with vacationers as far afield as Paris and Los Angeles.

While the startup is expanding, the Chinese economy is projected to grow at its slowest pace in a quarter-century. Yang said any slowdown would actually help the business by encouraging homeowners to list their properties in order to earn additional income. Travelers would also tend to seek cheaper alternatives to hotels, she said.

The startup often draws comparisons with Airbnb, the service that helped foster what's now referred to as "the sharing economy."

Tujia will be adding a new service that links users directly with homeowners, Ms Yang said, drawing it still closer to its US counterpart. In the past, the majority of the Chinese company's listings had been managed either by itself or third- party companies, instead of homeowners.

Tujia and its peers now face regulatory uncertainty around the world, as local interests consider the effect of on-demand services on traditional industries from taxis to hotels.

Unlike Airbnb, which in the US has drawn the attention of New York enforcement agencies for not paying hotel occupancy taxes, Tujia has so far remained relatively free of regulatory tangles. It collects the money and pays hotel levies as well as taxes on the rental income on behalf of property owners.

It also differs from its American counterpart in that it offers a range of ancillary services, from property management and inspections of listings to cleanups after guests leave.