Tencent surprised investors with its first profit drop in at least a decade after a freeze on new game approvals in China as the regulators are restructured. Executives said they had little clarity on when the process would return to normal, putting more pressure on a company that has lost more than US$160 billion (S$220.88 billion) of market value since its January peak. The company's New York-traded ADRs plunged as much as 10 per cent.

The very government that has favored Tencent as a technology champion is now directly hurting its results, with the bureaucratic shakeup in Beijing blocking its path to making money from games. The Shenzhen-based company relies on new content to draw and keep users on its WeChat messaging service, over which it sells in-game items and advertising to a billion-plus users. Tencent hasn't been able to cash in on the world's most popular games, including Fortnite and PlayerUnknown's Battlegrounds.

"From a revenue growth perspective, gaming is a key area of weakness, our biggest game is not monetizable," President Martin Lau said on a conference call. "This is something that's a little out of our control, but over time we'll solve it."

While there is a "green" process that enables the company to test monetization, that won't apply to PUBG because of its sheer scale, Lau said. In addition to the delay in new approvals, this week Tencent was ordered by the government to pull Monster Hunter: World just days after its debut, which the company said was a one-time issue.

"The results were really bad," said Benjamin Wu, a Shanghai-based analyst with consultancy Pacific Epoch. "The fact that Monster Hunter got taken down shows that even Tencent isn't immune from regulatory crackdowns." 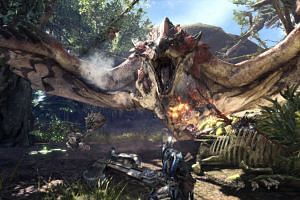 Longer-term, Tencent still commands a powerful asset in WeChat, the ubiquitous messaging service that underpins its gaming and ads business. Monthly active users climbed almost 10 per cent to 1.06 billion in the June quarter - a massive population of consumers not just for games and ads but also fledgling services from video to financial services. Advertising revenue jumped 39 per cent, while video subscription numbers doubled.

Tencent blamed its profit decline also on fewer investment gains. It said it cashed out of startups such as Ele.me and Mobike to raise capital to bankroll new services such as game live-streaming and in traditional retail.

One potentially promising area is payments, where monthly active users stood at 800 million as of June. Daily transaction volume was up 40 percent in the quarter. But Tencent also warned of a hit to gross margins by higher requirements on the reserves it must set aside for its financial services business.

"The major disappointment was the top line, and that's on top of estimates being hugely guided down from about a month ago," said Billy Leung, an analyst with Haitong International Securities Co in Hong Kong.

"They're concerned about their core business and looking for new areas of growth," he said. "The deeper implication is that games will be slowing down."

Gaming for now remains its bread and butter. Revenue rose 30 per cent to 73.7 billion yuan, but that's its slowest expansion in since 2015 and fell short of estimates for 77.7 billion yuan.

"Tencent's gaming business did even worse than expected," said Li Yujie, an analyst at RHB Research Institute in Hong Kong. "Despite having a lot of players for PUBG, its inability to monetize the game is causing a slowdown in revenue growth."