SAN FRANCISCO (REUTERS) - Chip supplier Qualcomm Inc said on Monday (Dec 10) it had won an order from a Chinese court banning the sale of several older Apple Inc iPhone models in China because of two patent violations, although Apple said its phones remained on sale.

The preliminary order from the Fuzhou Intermediate People's Court, issued last week, affects the iPhone 6S through the iPhone X that were originally sold with older versions of Apple's iOS operating system. It is not clear what the ruling means for phones with Apple's newer operating system, and Apple said all iPhone models remained for sale in China. The trio of models released in September were not part of the case.

China, Hong Kong and Taiwan are Apple's third-largest market, accounting for about one-fifth of Apple's $265.6 billion in sales in its most recent fiscal year.

The Chinese case is part of a global patent fight between Apple and Qualcomm that includes dozens of lawsuits. Qualcomm has also asked regulators in the United States to ban the importation of several iPhone models over patent concerns, but US officials have so far declined to do so.

Qualcomm, the biggest supplier of chips for mobile phones, filed its case in China in late 2017, arguing that Apple infringed patents on features related to resizing photographs and managing apps on a touch screen.

Apple responded that "Qualcomm's effort to ban our products is another desperate move by a company whose illegal practices are under investigation by regulators around the world."

Qualcomm general counsel Don Rosenberg said in a statement the Chinese court orders were in effect now and applied to specific features, rather than to an operating system.

Earlier this year, the same court banned the import of some microchips by Micron Technology Inc into China.

In the provincial Chinese court, which is separate from China's specialised intellectual property courts in Beijing, one party can request a ban on an opponent's product without the opponent getting a chance to present a defense. 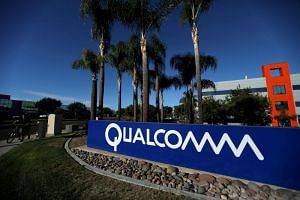 Apple said on Monday it had filed a request for reconsideration with the court, the first step in appealing the ban. To enforce the ban, Qualcomm separately will have to file complaints in what is known as an enforcement tribunal, where Apple will also have a chance to appeal.

Apple shares rose less than 1 per cent to US$169.60, recovering from an early drop when it became clear phones were still on sale, and Qualcomm stock rose 2.2 per cent to US$57.24.

Li Yiqiang, a patent lawyer at Faegre Baker Daniels who is not involved in the case, said the Chinese injunction could put pressure on Apple to reach a global settlement with Qualcomm.

Erick Robinson, a patent lawyer in Beijing and former Qualcomm lawyer, said that while Chinese courts had become fairer in recent years, nationalism could sometimes be a factor in rulings.

"There is probably a political play here. Apple is a direct competitor to the biggest companies in China, whereas Qualcomm is a supplier," Robinson said.

Qualcomm officials said tensions between the two nations had no bearing on the ruling. The company has had its share of troubles in China, from an unfavorable 2014 antitrust ruling to regulatory limbo that doomed its US$44 billion bid for Dutch chipmaker NXP Semiconductors.