City Developments deputy chairman was a philanthropist, champion for environment

The business community was reeling last night at the news of the sudden death of one of Singapore's top corporate chiefs at the age of only 62.

City Developments (CDL) deputy chairman Kwek Leng Joo died in his sleep after suffering a heart attack yesterday. He was noted for his philanthropy, passion for the environment and skills as a photographer.

Mr Kwek was appointed CDL's director in 1980 and held the role of managing director from 1995 until February last year, when he was appointed deputy chairman. 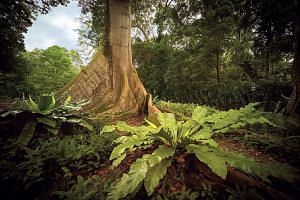 He is the younger brother of property tycoon Kwek Leng Beng, executive chairman of conglomerate Hong Leong Group, which includes listed CDL. The Kwek family is estimated by Forbes to have a fortune of US$6 billion (S$8.5 billion).

Mr Kwek was a strong advocate of corporate social responsibility and was well known for championing sustainable practices in businesses. He was conferred the President's Award for the Environment 2015 - Singapore's highest environmental accolade - last month.

Foreign Minister Vivian Balakrishnan, who previously headed the Ministry of the Environment and Water Resources, described Mr Kwek as the "perfect gentleman who was so passionate about sustainability, corporate social responsibility, photography and social issues".

"His humility, grace and generosity were inspiring. I was fortunate to have known and worked with him for so many years on some of his causes."

Mr Kwek was an avid photographer and raised over $3 million from sales of his photos and books for various environmental and charitable causes, including The Straits Times School Pocket Money Fund.

"He was a generous man who believed in helping needy children and nurturing them to realise their dreams," said Ms Tan Bee Heong, general manager of the fund.

Mr Kwek contributed actively to the local business and civic communities via various public appointments, including serving as president of the Singapore Chinese Chamber of Commerce and Industry (SCCCI) from 1993 to 1997, and 2001 to 2005.

"During these eight years when he headed the SCCCI as president, he left a legacy of salutary achievements," said Mr Thomas Chua, the current president.

Mr Kwek also brought in the first two female council members to the Chamberand collaborated with Mendaki to offer scholarships to Malay/Muslim undergraduates from local universities.