The future ownership of the dazzling heritage redevelopment Capitol Singapore hangs in the balance with the two main shareholders as well as its management deadlocked in a dispute over some key issues.

One of the owners, Perennial Real Estate Holdings, is bringing matters to a head by filing applications for three of its associated companies - which together own Capitol Singapore - to be wound up.

The developer has said it is willing to buy out the whole project, sell it to the other shareholder or sell it to a third party to break the impasse. 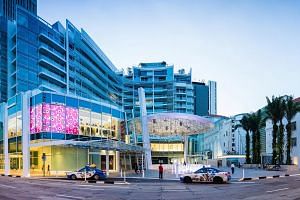 Capitol Theatre to re-open: 10 things about the new Capitol Singapore

Perennial told the Singapore Exchange yesterday that the shareholders and management of the Capitol entities "are in deadlock" - unable to agree on some key issues over the project in the last few months.

"Their relationship has been adversely affected such that the shareholders cannot realistically continue to work together constructively."

Capitol Singapore in North Bridge Road is an integrated project comprising a retail segment, the historic Capitol Theatre, and hotel and residential components.

Perennial - led by real estate veteran Pua Seck Guan and backed by business magnate Kuok Khoon Hong and Mr Ron Sim of Osim International - owns an effective 50 per cent of each of the three associates.

The other 50 per cent is held by Chesham Properties, an affiliate of private luxury developer Pontiac Land Group, owner of the Ritz-Carlton and Conrad Centennial hotels, and held by the Kwee family.

Perennial said it is willing to buy Chesham's 50 per cent or sell its half to Chesham. It is also open to having all shares sold to a third party.

A Perennial spokesman said separately the winding-up applications, made through its units, will serve to "protect and preserve" Capitol Singapore's assets until the High Court determines the processes.

She said the relevant Capitol entities will continue to be managed in line with the current practice.

"The retail tenants will be able to continue their business as usual and tenancy agreements... will continue to be observed."

Buyers of the residential component, Eden Residences Capitol, will not be affected either, as no winding-up bid has been made for Capitol Residential Development.

Perennial shares closed one cent, or 1.1 per cent, lower at 91 cents yesterday, after the announcement.