SINGAPORE - Cache Logistics Trust saw lower distribution per unit (DPU) for the fourth quarter, as payouts to perp holders and a tax expense in China ate into distributable income, according to results released on Friday morning (Jan 35).

Unit holders will get a DPU of 1.502 cents for the three months to Dec 31, 2018, down from 1.597 cents in the same period the previous year, after the real estate investment trust's (Reit) distributable income fell by 5.3 per cent year on year to $16.2 million.

Distributable income took a hit from a $1.4 million payment to perpetual security owners and withholding tax on the divestment of Jinshan Chemical Warehouse during the period, said the manager.

Even as gross revenue rose by 4.8 per cent to $31 million, net property income still dipped by 0.6 per cent to $23.4 million, on the back of lower contributions from the Singapore portfolio. Cache Logistics Trust felt the pinch from the sale of Hi-Speed Logistics Centre in May 2018 and lower income from 51, Alps Avenue, which had seen a rental top-up the previous year in the resolution to a lease dispute.

Cache Logistics Trust, which has 26 warehouses in Singapore and Australia, reported a committed occupancy rate of 95 per cent for the portfolio as at Dec 31, 2018.

The weighted average lease expiry (WALE) by net lettable area stood at 3.2 years and Daniel Cerf, chief executive of manager ARA Trust Management (Cache), noted in a statement that a strategy for portfolio rebalancing and growth was "in full swing". The initiative, which started in 2015, involves selling off leasehold and under-performing assets to re-invest in freehold sites with longer WALE. 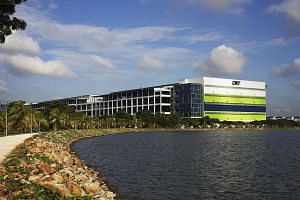 Cache Logistics Trust's DPU for the 12 months came up to 5.903 cents, against an adjusted DPU of 6.583 cents in 2017, taking into account a fund-raising rights issue that year.

The Reit had an aggregate leverage of 36.2 per cent and weighted average debt maturity of 3.9 years, with Mr Cerf crediting "our prudent capital management efforts" for "a Singapore portfolio that is entirely unencumbered". Unencumbered investment properties made up 87 per cent of Cache Logistics Trust's total portfolio value as at end-2018.

ARA Group now holds about 9.6 per cent of the trust's unit. It became the dominant unit holder by buying out sponsor CWT, which was owned at the time by debt-embattled Chinese conglomerate HNA Group. Mr Cerf noted: "During the year, ARA took full control of the manager and increased its stake substantially to become the single largest unit holder in Cache.

"This significant development demonstrates ARA's confidence and strong support in Cache, and we will continue to capitalise on ARA's established foothold to grow the Reit."