SINGAPORE - Mainboard-listed electric transport group BM Mobility (BMM) has called for an immediate suspension in the trading of its shares and warrants, in a Singapore Exchange (SGX) filing at 10.29am on Monday (July 29).

This comes after its independent auditor said last Friday that there were material uncertainties that may cast significant doubt on the group's ability to continue as a going concern.

It is also ahead of BMM's annual general meeting which will be held before Aug 21.

Shares of the company, which is on SGX's watch list, last traded at 0.7 cent last Friday.

The suspension request on Monday was made under Rule 1303(3) of the listing manual, which states that SGX may suspend trading if a company is unable to continue as a going concern or unable to demonstrate to SGX and its shareholders that it is able to do so.

On Friday after the market closed, BMM's independent auditor noted that the group had incurred a total net loss of around 13.4 million yuan (S$2.67 million) for the fourth quarter ended March 31 and had 13.1 million yuan in net cash used in operating activities.

As at March 31, BMM's current liabilities exceeded its current assets by some 17 million yuan, and the group had a 4.4 million yuan deficit in shareholders' funds. 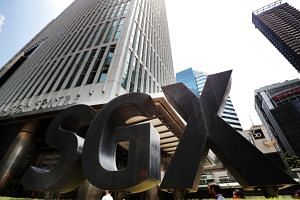 These factors indicate the existence of material uncertainties that may cast significant doubt on the group's and the company's ability to continue as going concerns, and to realise their assets and discharge their liabilities in the ordinary course of business, the independent auditor Messrs Moore Stephens said.

The independent auditor also issued a disclaimer of opinion on the group's financial statements from Jan 1, 2018, to March 31, 2019, as it could not obtain sufficient appropriate audit evidence to provide a basis for an opinion.

BMM's management had earlier prepared the FY2019 statements on the assumption that it will continue as a going concern - but this will depend on certain assumptions and various efforts by the group, the outcome of which is "inherently uncertain", the auditor noted.

These efforts, according to BMM, include tightening cost controls over the operating expenses and seeking to improve the cash flows.

The management said it had prepared a cash flow projection that shows the group will have sufficient working capital for its operations for the next 12 months from March 31, and will be able to meet its obligations.

The management also said it will evaluate strategies to improve the financial performance of the green energy business, that it will look for alternative sources of finance where necessary to enable the group to meet its obligations as and when they fall due, and that it believes the disposal of two wholly-owned subsidiaries after the end of FY2019 will result in an estimated gain on disposal of 58.77 million yuan.

BMM had been in the process of selling the two subsidiaries, Ziwo (Fujian) Import & Export Trading and Zhihe (Fujian) Technology, to a former employee for 3 million yuan. But BMM is now looking for new funders to support the buyer, as it believes the buyer, Li Shuet Wing, is unable to pay the full purchase price, BMM said on July 15 in response to SGX queries.

Separately, in April, BMM said that its former financial controller Lim Gwo Bin was "unresponsive and uncooperative" in the days after sending in his resignation on March 25.

Responding to queries from The Business Times, Mr Lim said in April that he had in fact responded to a March 26 request by the company's chairman for a quotation for group accounting outsourcing on the same day.

Mr Lim also told BT that he did not inform the company of any unresolved issues for "fear of retaliation from the company" as his letter of employment had certain confidentiality clauses.

Mr Lim, a Malaysian, was let go just two months into his appointment which had prompted queries from SGX from the get-go. The bourse operator had asked why BMM appointed a financial controller living in Malaysia, how the nominating committee came to know Mr Lim and who had recommended him, among other questions.