WILMINGTON, DELAWARE (REUTERS)- A group of 13 automakers will contribute as much as US$130 million to compensate those injured by faulty Takata air bag inflators as part of a deal to resolve the Japanese company's bankruptcy, a US plaintiffs' attorney told Reuters.

The agreement clears the way for the sale of Takata's non-inflator business to Key Safety Systems, a unit of China's Ningo Joyson Electric, for US$1.6 billion, helping to ensure a steady supply of car parts for the world's biggest automakers.

Takata and its US unit, TK Holdings, filed for bankruptcy last year in the wake of the world's largest automotive safety recall, triggered by air bag inflators that can explode with excessive force, unleashing metal shrapnel inside cars and trucks.

Attorney Joe Rice of Motley Rice, who represents dozens of personal injury plaintiffs in the bankruptcy, said the deal, which was disclosed in court papers on Saturday, was aimed at keeping Takata operations afloat so it could make replacement inflator kits.

Tens of millions of air bags with the inflators have been recalled but not yet replaced.

In an interview late on Monday, Mr Rice said the group of 13 automakers would contribute about US$80 million to US$130 million to Takata's bankruptcy estate to help compensate those injured by the Takata inflators.

In return for the automakers' contribution, a committee of injured drivers dropped their objection to TK Holdings' proposed bankruptcy exit plan. The plan will be presented to a US judge on Friday for approval. 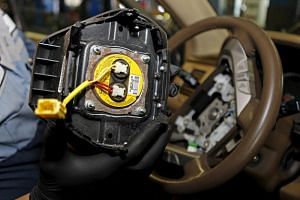 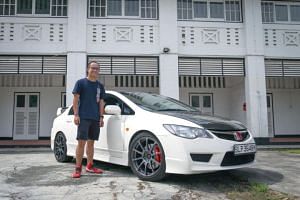 Fix faulty airbag? Just take it out, some told

What lies beneath spate of Japanese corporate scandals?

Victims of the faulty inflators will also be able to collect from a separate US$125 million compensation fund created as part of a plea deal Takata entered with the US Department of Justice early last year. As part of that plea, automakers will receive their share of an US$850 million restitution fund.

Mr Rice said funds from the Justice Department settlement and the bankruptcy are likely to fall short of full compensation for injured drivers, but they will still be able to sue the car manufacturers.

The one exception is Honda Motor, which agreed to create a trust to ensure injuries linked to its vehicles will be compensated in full, according to Mr Rice. He said Honda also will not contest fault for the injuries.

At least 22 deaths and hundreds of injuries worldwide are linked to the Takata inflators.

Honda has faced the greatest number of air bag-related claims of the automakers, and 20 of the deaths have occurred in Honda vehicles, most of which were in the United States. In return for funding the trust, Honda will be shielded from further lawsuits. That also means it will not face the risk of punitive damages.

Last year, plaintiffs said an internal Honda email showed Honda was long aware of the risks of Takata air bags, the type of allegation that could have opened the way to punitive damages.

Honda has said it was a victim of deception by Takata, and noted in a statement Tuesday that the US$850 million fund created as part of the plea deal was meant to compensate automakers for Takata's scheme.

Honda said it is committed to swiftly and fully compensating those injured caused by defective inflators in its vehicles, according to the statement, and said claimants could still opt into the court system.

The 12 other carmakers that were involved in the settlement, including Ford Motor, Toyota Motor, General Motors and Volkswagen, have 18 months to opt into the trust, if they agree to compensate drivers in full.

Until then, they will continue to defend personal injury and wrongful death lawsuits. They will be able to offset any judgments with payments made to claimants from the Justice Department fund and the bankruptcy.

The automakers trust being funded by Honda is similar to arrangements used by manufacturers driven into bankruptcy over asbestos-tainted products. While the asbestos trusts have often been underfunded, the automakers trust will be a pay-as-you-go system, helping to ensure it remains solvent.