SINGAPORE (BLOOMBERG) - Asian stocks rose on Monday (Nov 7) after the Federal Bureau of Investigation reaffirmed its view that Mrs Hillary Clinton's handling of her e-mails as secretary of state wasn't a crime.

The MSCI Asia-Pacific Index gained 0.2 per cent to 136.93 as of 9:01am in Tokyo. Japan's Topix index added 1.2 per cent as the yen fell 1 per cent against the S dollar. US stock futures jumped, as did the Mexican peso.

E-mini futures on the S&P 500 jumped 1.3 per cent. The US equity benchmark index dropped 0.2 per cent on Friday for a ninth day of declines, after data showing progress in the American labour market did little to soothe anxiety over the presidential election.

The Asian share gauge had dropped for the past two weeks and the S&P 500 Index had posted the longest streak of daily declines since 1980 as Mrs Clinton's lead over Mr Donald Trump narrowed in most polls after the FBI reopened a probe into an unauthorised e-mail server. 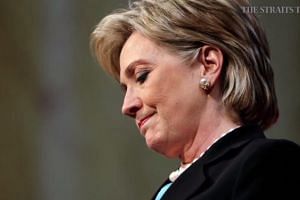 Hillary Clinton given all-clear by FBI on e-mail controversy

"We're seeing a risk-on rally, looking at the currency movements," Mr James Woods, a strategist at Rivkin Securities in Sydney, said by phone. "If Clinton widens her lead again, that will be very positive for the market. It will be good to get the US elections out of the way so investors can focus on earnings and the economy."

The FBI said it's sticking with its view that Mrs Clinton's handling of e-mails during her tenure as secretary of state wasn't a crime after reviewing new communications potentially related to the Democratic candidate, director James Comey said in a letter to Congress dated Sunday in the US. The statement came just over a week after Mr Comey said the bureau was looking into more e-mails.

Political matters may also weigh on Hong Kong shares this week. China's National People's Congress is discussing an interpretation of Hong Kong law regarding the nation's "territorial integrity", a member of the city's delegation said, setting the stage for Beijing's potential intervention in a legal fight over two pro-independence legislators. A Hong Kong court is considering their fates, and lawyers have warned that Chinese government intervention would undermine the independence of the judiciary.