Later in the day, the US Federal Reserve is widely expected to cut interest rates for the first time since the financial crisis more than a decade ago. The expected easing has supported risk asset prices worldwide.

MSCI's broadest index of Asia-Pacific shares outside Japan was down 0.04 per cent while Japan's Nikkei slid 0.84 per cent.

Major Wall Street stock averages ended slightly lower on Tuesday, with the S&P 500 losing 0.26 per cent, after Trump warned China against waiting out his current presidential term before finalising a trade deal.

As a new round of US-China trade negotiations started in Shanghai, Trump tweeted that, if he wins re-election in November 2020, the outcome could be no agreement or a harsher one.

"Trump's comments suggest that US-China trade negotiations are not going well, which is a new negative factor for the markets," said Osamu Takashima, head of G10 FX strategy at Citigroup Global Markets Japan in Tokyo. 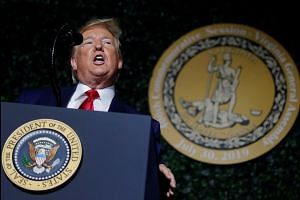 The S&P 500 index has risen 2.4 per cent so far this month, bolstered by expectations for Fed easing.

Trump on Tuesday reiterated his call for the Fed to make a large interest rate cut, saying he was disappointed in the US central bank and that it had put him at a disadvantage by not acting sooner.

In Asia, a key manufacturing survey out of China will be a main focus for traders.

In currency markets, the British pound remains near a 28-month low hit the previous day on growing concerns about a disorderly Brexit.

"In addition to Brexit, markets are starting to price in the Bank of England moving to dovish from hawkish at its next meeting, so this drives sterling depreciation," Citigroup's Takashima said.

Other major currencies were less volatile with the yen flat at 108.58 yen to the dollar. The euro stood little changed at US$1.1158.

Oil prices held firm near two-week highs after 2 per cent gains on Tuesday.

US West Texas Intermediate (WTI) crude gained 0.41 per cent to US$58.29 per barrel in early Asian trade.