(REUTERS) - Apple Inc's shares hit a record-high on Friday (Nov 3) after the tech giant reported a blowout fourth quarter and shrugged off concerns related to the iPhone X, prompting more analysts to put a trillion-dollar valuation on the company.

The stock rose as much as 3.7 per cent to US$174.26 (S$238), briefly breaching US$900 billion in market value, amid declines in the broader market. The gains added nearly US$32 billion to the company's market capitalisation.

The Cupertino, California-based company also forecast a strong holiday quarter ahead, which will include the iPhone X that started selling on Nov 3.

The glass-and-steel US$999 phone appeared to have brought back the frenzy associated with iPhone launches - long lines formed outside Apple stores in Asia as fans flocked to buy the new phone. 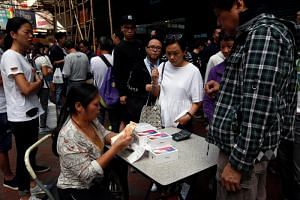 Apple said on Thursday it expects first-quarter revenue of US$84 billion to US$87 billion, at the high end of analysts average expectations of US$84.18 billion, according to Thomson Reuters I/B/E/S.

"We - and many others - had feared that guidance could be weaker, reflecting only 9 weeks of the flagship iPhone X and limitations on supply," Bernstein analyst Toni Sacconaghi said.

At least 13 brokerages raised their price targets on the stock, with Citigroup making the most bullish move by raising its price target by US$30 to US$200.

Of the 37 analysts that track the stock, as per Thomson Reuters data, 31 had a "buy", or higher rating. None had a"sell".

With the latest brokerage actions, at least nine Wall Street analysts now have target prices that puts Apple's market value above US$1 trillion. Drexel Hamilton's Brian White is still the most bullish among Apple analysts tracked by Thomson Reuters, raising his target price further to US$235.

Apple's fourth-quarter results underscored the company's ability to drive growth not just on iPhones, but across its range of products, analysts said.

The company's suite now includes five different iPhone models, the iPad, the Mac and the Apple Watch as well as its fast-growing services.

Apple said it sold 46.7 million iPhones in the fourth quarter ended Sept 30, above analysts' estimates of 46.4 million, according to financial data and analytics firm FactSet. Mac and iPad sales too were above the estimates of most analysts.